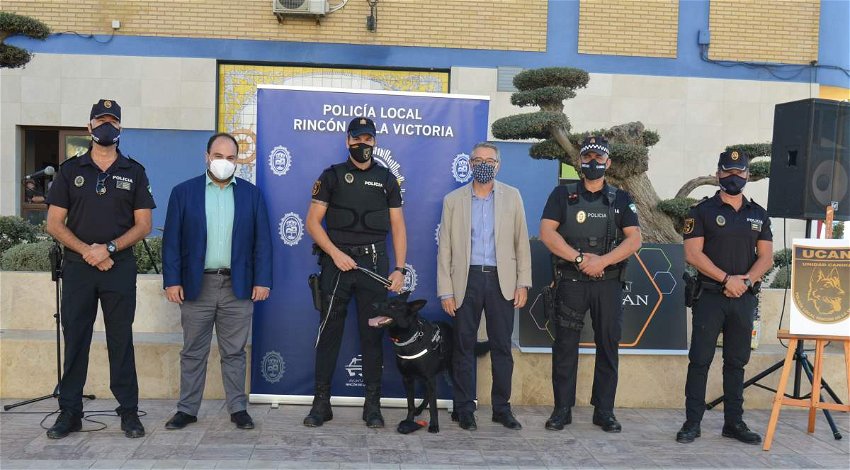 THE Citizen Security Area of ​​the Rincón de la Victoria City Council today, Tuesday, October 6, presented the first Canine Unit (UCAN) of the Local Police that will support the services to combat drug dealing and use in public places in the municipality.

The councillor responsible for the area, Borja Ortiz (PP) has explained that the usefulness of dogs at the police level is infinite. “Through the creation of UCAN, the police patrol is strongly reinforced with the presence of this properly trained dog, performing services in parks, leisure areas, shopping areas, places with a large pedestrian influx, with a greater prospect of success in their actions, both in the control of people and in the catching of criminals on foot ”.
The mayor of Rincón de la Victoria, Francisco Salado, has expressed his satisfaction “for the creation of this canine unit that will increase the professionalism of the Police Headquarters and the safety of our citizens.” Salado has highlighted the qualification of these dogs in the detection of narcotics that will carry the UCAN’s K9 call sign.”
“This Government Team has always considered it a priority that the Local Police of our city can carry out its work in the best possible conditions. The mobile fleet has grown, and so has the security of our officers, who all have protective vests. In just one year we have managed to solve a historical demand from the Police,” says the councillor.
The UCAN Unit dog is trained, among many other things, to passively point out who is carrying some type of substance, even going so far as to mark with its nose the exact point where the substance is found.
In addition, it will help the surveillance, control and prevention of substances around schools and institutes, carrying out patrols on foot with the dog with prevention functions in areas of massive influx of people like festivals and sporting events.
Also, the security and protection of municipal buildings, carrying out preventive traffic controls for the detection of psychotropic substances or drugs, thereby avoiding their entry to this town, prevention of public consumption of psychotropic or narcotic substances in parks, gardens and those places where citizens denounce their consumption or sale, as well as support for civilian groups in relation to retail.
The Rincón de la Victoria Local Police officer in charge of the Unit has a broad training curriculum as a canine trainer specialized in citizen security.
Finally, the councillor explained that the Canine unit focuses on a preventive and educational police model in relation to prohibited behaviours, as well as in relation to the fulfilment of the Municipal Ordinance on Animal Keeping, such as talks, programmes and educational workshops for adolescents, adults and guardians or parents of the youngest or even monitoring or instruction of reports of animal abuse or abandonment of animals.
We hope you enjoyed this article “Rincón de la Victoria presents the Canine Unit specialised in the fight against drugs”.
You may also wish to read “Sabor a Málaga awards its seal to the craft beers from ‘La Fábrica de Cruzcampo’ in Málaga.”
Euro Weekly News is delighted to continue to be able to bring you a range of News that doesn’t cost you anything but your internet connection. Whether it’s Local Spanish News or International Entertainment News, we’ve got you covered!