Female entrepreneurship on the rise in Santa Pola: Focus on Females 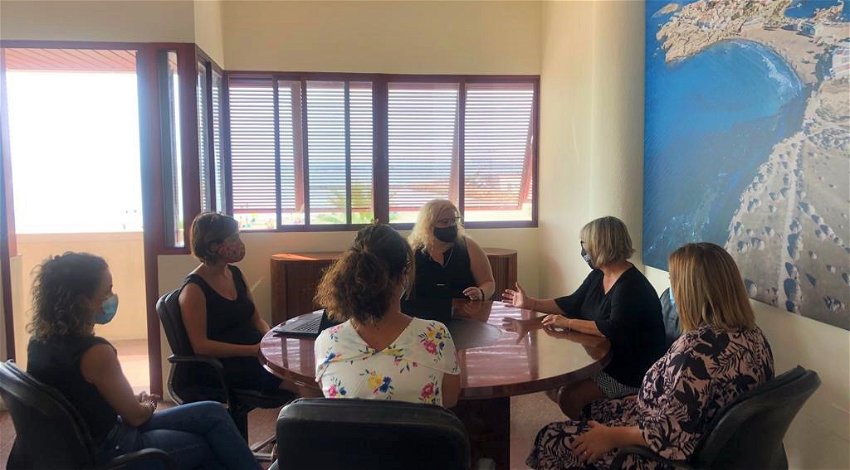 Female entrepreneurship is on the rise in the municipality of Santa Pola with specific business talks and businesses being launched by women in the area.

THE successful launch of a Women in Business networking event, held at La Piazza in Gran Alacant, saw women from across a range of businesses, including; language teachers, lawyers, estate agents and scuba diving instructors, gather together to discuss ideas and help promote each others entrepreneurial ventures.
Recently, Santa Pola City Council welcomed two local female entrepreneurs, Diana Carrasco and Mª Angeles Cáceres, to discuss their co-working spaces in the area.
The pair had the opportunity to meet with Mayor Loreto Serrano, Nely Baile, the Councillor for Commerce, Trini Ortiz, the Councillor for Urban Planning and Industry and Llanos Córcoles, head of the Emprende Santa Pola Service to present their businesses.
The two entrepreneurs explained that their co-working spaces were shared offices in which self-employed professionals, teleworkers and entrepreneurs from different sectors share the same space without losing their independence.
Both women elaborated on the role of their co-working spaces likening them to “working in a company, but instead of having colleagues in different departments, you are surrounded by other professionals.”
Mayor Serrano personally congratulated the women for their businesses and highlighted the importance of having spaces of this type in the municipality, where entrepreneurial ecosystems and the creation of transformative and innovative professional communities are created.
She has committed to visiting the two spaces and contemplating the possibility of signing a possible public-private agreement that allows the collaboration of the Entrepreneurs department of the City Council and the two spaces.
Other female entrepreneurs will be boosted by the backing the two women have received from the Mayor and the Santa Pola City Council, with EWN speaking to one local business owner about her own entrepreneurial journey.
Sharon García, who runs Sharman Estates SL, located in Gran Alacant, spoke to EWN about her journey as a female entrepreneur: “Being a female entrepreneur is a new and fresh concept which has allowed me to merge my home life as a mum and business owner without any part having a negative outcome on the other.”
Sharon offered some revealing insights into struggles she has faced: “I have personally found that the biggest taboo when it comes to being a woman in business is women against women – instead of helping one another, the natural instinct is to compete, making it slightly harder to progress.”
Asked about whether she had any advice for women looking to follow her down the same path, she said: “My advice would be to keep working towards a unified approach as in the long run it will lead to overall success.”
Commenting on her plans for the future, Sharon said: “My goals for the future is to introduce the “one-stop shop” concept so clients can obtain all services tailored to their specific needs.”
Women in Business
La Piazza – Gran Alacant (second Thursday of every month)
Simple Social Hub
Avenida de Escandinavia 35 – Gran Alacant
Phone: 650 374 193
Co- Labora
Calle Gabriel Miró 58 – Santa Pola
Phone: 618 512 825
Sharman Estates SL
Located in Gran Alacant & International Offices
[email protected]
Phone: 621 248 038
Thank you for reading this article “Female entrepreneurship on the rise in Santa Pola”.