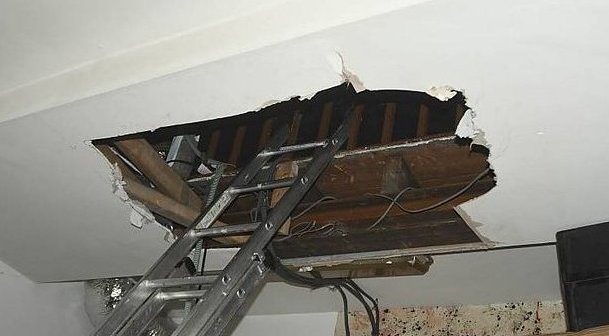 A ‘death trap’ cannabis set-up found in an empty curry house has been shut down with officers admitting they were shocked “at how dangerous the place was”.

OVER the Christmas period, officers from Sheffield South West Neighbourhood Team responded to reports about suspicious activity linked to the former restaurant on Chesterfield Road.

A quick check around the exterior of the building led the team to believe that all wasn’t as it seemed at the premises, which had been cleared out early last year.

Once inside, the team found a cannabis set up with around 200 plants.

Sergeant Ben Hanson said: “It was a fairly substantial set-up but what struck the team from the start was how dangerous the entire premises were.

“The first challenge was getting officers inside safely, using ladders we managed to cut a hole in a window as the doors to the building were blocked up with huge metal shutters and impossible to open.

“Once inside, we soon realised that there was something strange about the building…there were no stairs! Instead of an actual staircase, a ladder was perched on some cushions to allow access down to the cellar, it was a lethal set-up.”

No one was present at the premises and enquiries are ongoing.

Sgt Hanson continued: “I’m not overstating how dangerous this place was. Those behind the production were putting their lives at risk every time they entered to check their crop.

“However, it’s not unusual for us to be faced with this type of construction or lethal set-ups. Officers often uncover dodgy wiring and electrical equipment which can lead to explosions and fires, putting neighbouring properties at risk too.