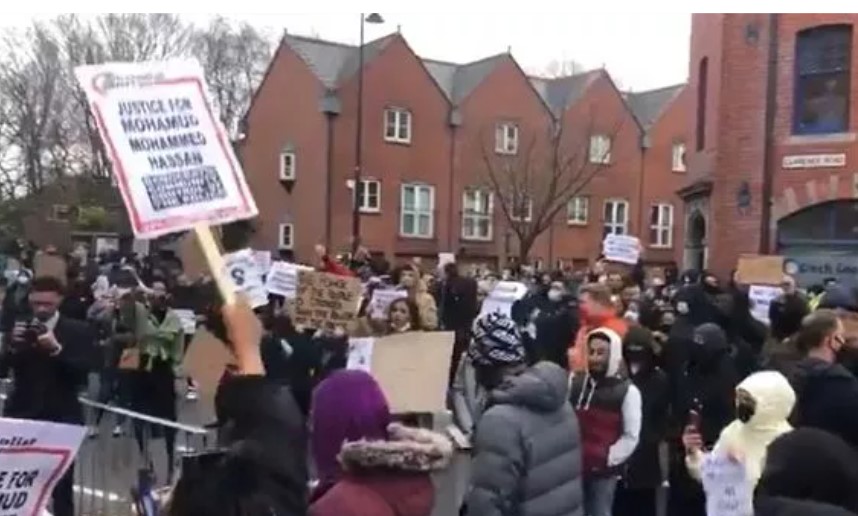 Angry protestors have gathered in Cardiff Bay, Wales, hurling smoke bombs and missiles at the police after more than 200 people marched from the city centre, carrying signs that said ‘Black Lives Matter’ and ‘Stop police brutality’, to demand justice for 24-year-old Mohamud Mohammed Hassan, who was released from police custody only a few hours earlier but later died at his home.

Mr Hassan had been arrested last Friday evening (January 8) after reports of a disturbance at his home but was then released without charge, on Saturday morning, but later died at his home, with his family claiming he had been assaulted whilst in police custody, with a South Wales Police spokesman saying his death was “sudden and unexplained”  and urged against speculation.

He added that early investigations “Indicate no misconduct issues and no excessive force” and that Mr Hassan’s death has been referred to the Independent Office for Police Conduct (IOPC).

Mark Drakeford, Wales’ First Minister called reports “Deeply concerning”, saying, “I understand that the police have already referred, as they would have to, this matter to the independent police investigation service”.

Adam Price, the Plaid Cymru leader, speaking to Mr Drakeford about the incident, said, “Having been taken into custody at Cardiff Bay police station, Mr Hassan was released without charge on Saturday. Later that evening he tragically died. Witnesses were reportedly shocked by Mr Hassan’s condition following his release, saying that his tracksuit was covered in blood and he had severe injuries and bruising”.

He continued, “There can be no doubt that this is a deeply harrowing case and every effort should be made to seek the truth of what happened, why was Mohamud Hassan arrested, what happened during his arrest, did he have legal representation, was there any aftercare, why did this young man die?”.

Thank you for taking the time to read this news article “Violence Breaks Out In Cardiff As Crowds Hurl Smoke Bombs At Police”.