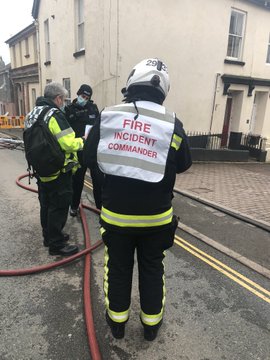 Devon police declared a major incident shortly before midday on Thursday, January 21, after multiple underground explosions forced 25 people to evacuate their homes in Kingsbridge, with one requiring medical treatment. Officials suspect that a gas leak or electrical fault may have caused the explosions, and experts in both fields are examining the site to establish the origin.

A Devon and Cornwall Police spokesman said: ‘Police were contacted at 11.50am to reports of possible explosions from a suspected gas leak or electrical shortage coming from under the road in Church Street, Kingsbridge.

‘Church Street has been closed and around 25 people from properties in the area have been evacuated and temporary shelter is being arranged.

‘No injuries have been reported. Fire, police and engineers from both gas and electric companies are on the scene. The public are being asked to avoid the area.’

According to the local area’s Kingsbridge Police, around 105 properties in South Hams were left without electricity, and while one person was taken to hospital hi injuries were not thought to be serious.

Lee Cotton, Wales and West Utilities Gas Emergency Service Manager for South Devon, said: ‘We were called to reports of an explosion in the Church Street area of Kingsbridge this afternoon and immediately sent a team of engineers to the scene.

‘On arrival we found that the road surface of Church Street had been damaged and emergency services were in control of the scene.

‘We are working with the emergency services and electricity distribution network operator Western Power Distribution to investigate the cause of the explosion and make the area safe.