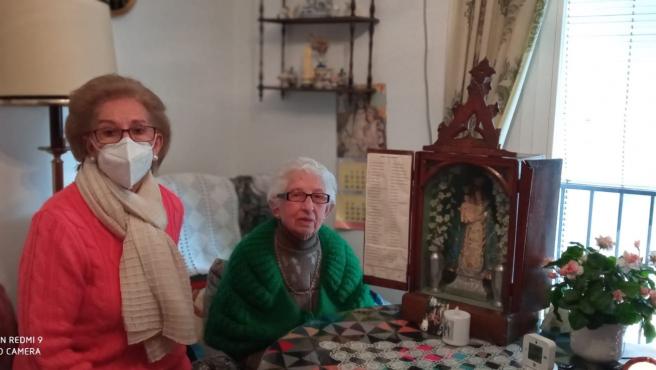 The owner Hortensia and Pilar who launched the appeal CREDIT: Ayuntamiento de Montefrio

A ‘PORTABLE chapel’ more than a century old which went missing from Montefrio, Granada, in March last year, has been located.

Thanks to social media, a campaign started by local residents to find the Virgen de los Remedios portable chapel which went missing when the whole country went into lockdown, has been fruitful.

Concepcion Perez and Pilar Carralcazar, both 75, explained that the little chapel is shared by the town, visiting a house each day, where it spends 24 hours until it is taken to the next household.

During confinement, it went missing and one of the local women was especially desperate to have it in her home because one of her relatives was ill and she wanted to ask the Virgin to heal him. The campaign was launched, and it was discovered in the home of an elderly woman who, due to lockdown, had forgotten to pass it on to the next household. One of her relatives saw the appeal on TV and reminded her, which is how the image of the Virgin in its little shrine finally appeared. It is just 40 centimetres high, and the wooden image is inside a glass housing with wooden doors. On it, there is a list of the names and addresses of the 30 local residents who receive it in their homes and there is even a waiting list for those who want to have their chance.

It belongs to a local woman, Hortensia, and both she and the local mayor, Remedios Gamez, appeared very happy that the chapel had been found thanks to the appeal. Locals will now take it in turns to have it in their homes again following the tradition.