‘Mutiny’ At Heathrow As Frustrated Passengers Leap Over Barriers 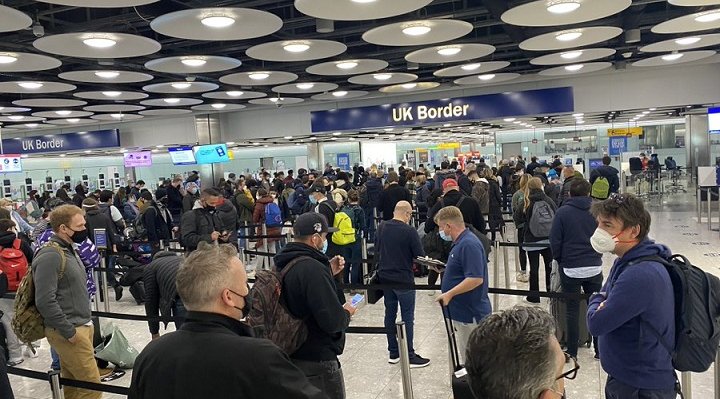 A plane-full of passengers returning from Dubai on Saturday afternoon, January 30 who were forced to stand in a queue for hours after an automated passport machine broke down, took matters into their own hands and started leaping over the barriers in a scene one traveller described as a “mutiny” in Heathrow airport.

Adnan Raza, from Birmingham, was at the airport at the time and described the chaos that ensued when tired passengers had had enough.

“Behind me the machines stopped working and there was a bit of a mutiny, people started jumping over the barriers of the automated machines. There was a melee… security pacified the situation,” Mr Raza said.

Grant Shapps, the Transport Secretary, announced on January 29, via Twitter that the UK had added the United Arab Emirates to its red list, meaning that anyone travelling from the UAE to the UK would need to take an indirect flight.

The Home Office later confirmed that two passengers “attempted to evade being checked” by Border Force officers, but were “immediately stopped and checked.”

Mr Raza continued: “We get to Heathrow and the mood is very dour.

“There’s absolutely no social distancing, it’s ridiculous. They police how well you’re wearing your mask i.e. over your nose.

“I saw this with other passengers, but when you’re in the queues for passport control every body is on top of each other.”

From tomorrow (Friday 29 Jan at 1pm), we’re extending our travel ban with the United Arab Emirates, Burundi and Rwanda all added to the UK's red list. 1/3