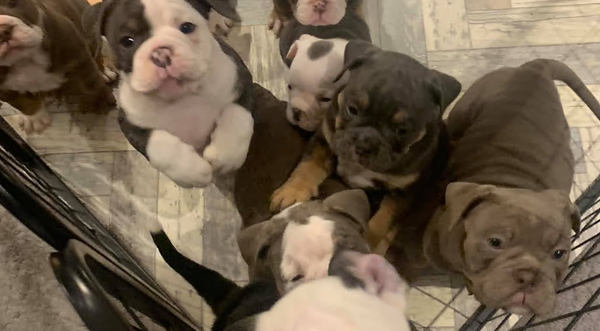 ‘Pawsome work’ as dog nabbers arrested and stolen puppies are returned to their owners.

SEVEN adorable English Bull puppies were taken from their home in Wigan during a burglary on Tuesday, February 2, and the owners were understandably distraught.

Just after 2.30am, officers from Greater Manchester Police were called to a report of a burglary on Shelley Street in Leigh, in which all of the puppies were stolen.

Thankfully, they were later discovered at a property in Liverpool after receiving a report of puppies being carried into an address on Marina Avenue in Merseyside.

Two 21-year-old men and a 20-year-old woman have been arrested on suspicion of burglary and have since been released under investigation pending further enquiries.

Sergeant Gareth Mark, of GMP’s Wigan district, said: “Thanks to a vital report from a member of the public, the puppies have been rightfully returned to their owner after they were taken in Wigan.

“Their owners were understandably worried but thankfully, an eagle-eyed member of the public helped us to return them home.

“A number of lines of enquiry are still on-going into the incident and anyone with information can call 101 quoting incident number 602 of 03/02/2021.”

In Spain, more than 50 per cent of all dogs stolen are greyhounds, according to information released by the Guardia Civil.

The police force took to their Twitter page to make public aware of the dangers of dog theft in Spain, highlighting greyhounds as one of the breeds most vulnerable to being stolen.

The news comes as at the end of January police arrested four people suspected of stealing dozens of hunting dogs from Valencia, Castellon and Albacete.

The gang gas been accused of robbery with force, animal abuse, animal abandonment, falsification of documents and belonging to a criminal organisation.