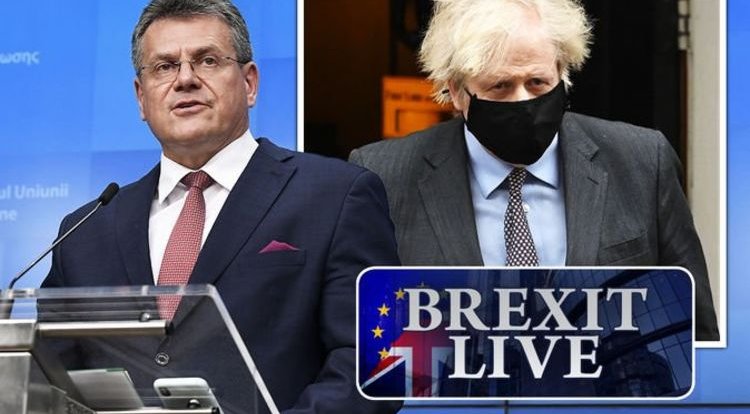 BRUSSELS has warned the UK there will be consequences if it doesn’t adhere to EU law before today’s showdown meeting. Ahead of today’s joint committee meeting, vice-President of the EU Commission, Maros Sefcovic has warned the UK must be prepared for the backlash from its departure from the EU.

The vice-President will meet together today with Cabinet Office Minister Michael Gove to discuss the trade issues experienced in Northern Ireland. Despite the UK asking for an extension to the grace period on goods flowing between Great Britain and Northern Ireland, the EU official insisted not “everything can be solved.” Northern Irish officials are also expected to attend the committee today in support of extending the grace period until 2023.

Ahead of the crunch meeting today, Mr Sefcovic said: “Not everything can be solved. There are inevitable consequences of Brexit, and simply we have to follow EU law, we have to follow the agreement we just signed. The EU will always remain constructive and solution-driven, but I’ve also reminded my British partners that this must be a two-way street. We’ve had a very intense session in December to make sure entry points would be up and ready by the middle of this year.”

Boris Johnson has been urged to scrap the Northern Ireland protocol due to the damage it has caused post-Brexit to the country by a leading figure of the Good Friday Agreement.

Amid rising tensions over the procedure, Lord David Trimble, who served as First Minister for Northern Ireland, has joined forces with other officials calling for the protocol to be removed. In a letter, Ben Habib a former Brexit Party MEP, former DUP MP Jim Allister, and Baroness Kate Hoey, warned the protocol causes serious damage to the Union.

Due to this, they confirmed they intend to take legal action over the matter with the support of DUP leader, Arlene Foster.

Please check back later for updates on the meeting which could have a profound effect on UK trade with the EU.