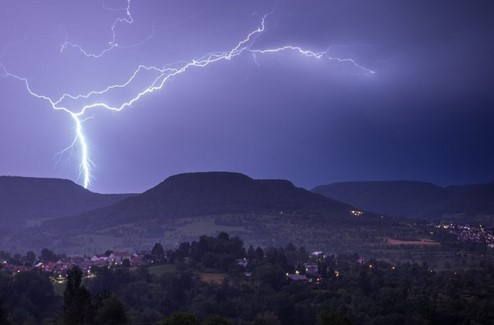 Residents of the Monteluz neighbourhood in Albolote, in Granada province, had a huge scare on Sunday afternoon at around 6.45pm, when lightning struck an electrical tower located in one of the homes on Calle Olmos, causing blackouts in some of the surrounding properties, as well as the breakdown of home appliances and electrical installations, with one home even suffering a small fire.
One of the neighbours, José Manuel, who witnessed the lightning hit the home, commented, “this is not normal”, although, recalling a similar accident six years ago when lightning struck, he said that one was a lot stronger, and actually melted the power lines, which this time did not happen thankfully, as technicians believe the tower had absorbed most of the impact this time.
José Manuel told granadadigital.es that Endesa technicians came to the area after the power differentials on the streets jumped and several electricity meters in homes were burned, with one home needing to call the fire brigade to put out a small fire that the surge had caused, and in another home, the air conditioning unit was destroyed.
Four homes were still without electricity on Monday, which José Manuel claims need never need to happen again if Endesa did what they had spoken of doing some years ago and burying all the power cables underground, saying, “Monteluz was opened to insert high voltage cables”.

The people living in the house on Calle Olmos, next door to the house that got hit, said, “This is the third time in 20 years. The town hall or Endesa must intervene here. Competent people who can help us”, and are planning on writing a letter to the town hall of Albolote, adding, “Between the Covid, the earthquakes and now this, what a year”.