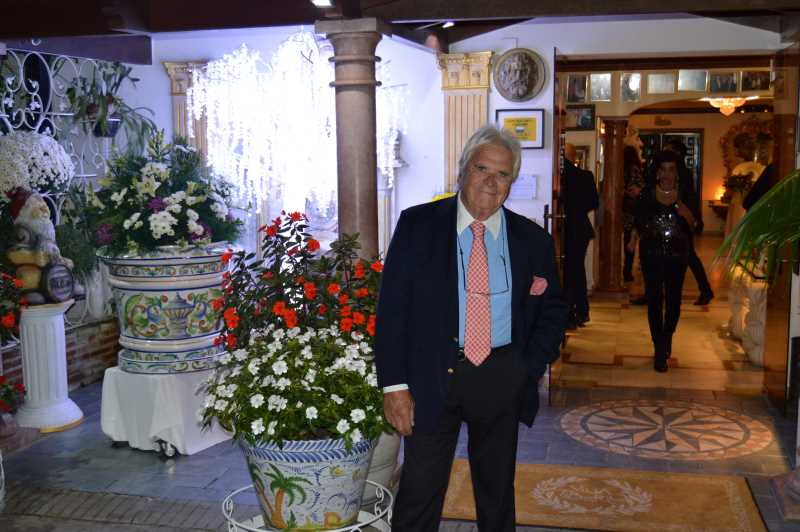 IT was not long after the end of the Second World War, that a seven-year-old who was begging on the streets of Naples dreamt of a better life for himself and his family.

Later, older and more mature, but still with that dream, now aged 18, Sandro Morelli took himself to London and spent his first night sleeping under a bridge but to him this was the start of a whole new adventure.

He was determined to succeed and after first working as washer upper at the Brompton Hospital he became a chef at the prestigious Ritz Hotel and then with the help of his brother Raffaele he opened two great eateries in London, Barbarella in 1976 and Barbarella 2 in 1979.

These iconic night spots attracted a huge list of celebrities and one, actor Sean Connery, suggested that he should consider opening a restaurant on the Costa del Sol and hence the die was cast.

More than 30 years ago, Sandro purchased an old villa with a great deal of land to create, his life’s work, Villa Tiberio which has become an icon for the area and a real oasis of calm and tranquillity.

Sandro loves to garden and it took him two years to create the first glimmering of what is now a fantasy setting, surrounded by classical statues, trees and plants of all types and more fountains than you could believe possible.

No matter how well he has done, he has never forgotten his early days and is committed to raise funds to help others and until the onset of the pandemic held regular charity events for the Cudeca Cancer Hospice, Children with Cancer, Red Cross and other major charities, allowing him to raise more than €500,000 over the years and welcome numerous celebrities.

Villa Tiberio has now re-opened and Sandro looks forward to welcoming customers, old and new to enjoy the exceptional food in the beautiful gardens with customers assured that all health and hygiene requirements have been put in place.

In Marbella, it can often be difficult to find parking, but not at Villa Tiberio where its large car park leads into the beautiful gardens.

Sandro’s concept is to bring a bit of happiness into people’s lives as they enter the enchanted garden restaurant (which received a Best Garden in Andalucia Award from the Junta) and as he never forgets his humble origins is determined not only to enjoy life but to help others to enjoy theirs, be they paying guests or children who need help.

In his words he is a true European, an Italian living and working in Spain with so many British friends and clients (not to forget the Irish and other nationalities) who fill the restaurant.

For an exceptional evening with a difference in one of the longest established restaurants in Marbella, you can’t go wrong by visiting Villa Tiberio at Carretera N-340, Km. 178.5 (next to Marbella Club) which is a picture-perfect setting from the moment you enter until the moment that you leave.

Make your reservation now by calling 952 771 799 or visit https://www.villatiberio.com to book online.