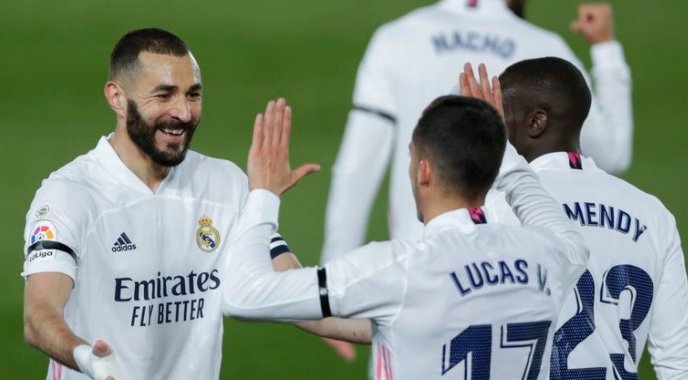 Real Madrid – amid all the uproar surrounding the European Super League, of which, their club president Florentino Perez was reportedly going to be president of – travelled to the Southern part of Spain tonight, Wednesday 21, to play Cádiz in their Ramón de Carranza stadium, knowing that a win would take them to the top of La Liga, and that is exactly what they did, coming away with a 3-0 victory.

Karim Benzema was the undoubted star of the show, scoring twice and providing an assist, to move his team top of the table, level on points with city rivals Atletico Madrid, who play on Thursday evening against Huesca, with Los Blancos having made up an eleven point difference on Atletico in the past months.

Coach, Zinedine Zidane gave a start to 20-year-old Antonio Blanco, who must have impressed on his debut last weekend – as Isco was left on the bench – featuring in a midfield that was already missing Luca Modric and Toni Kroos, with Benzema, Vinicius and Rodrygo as the front three.

On 30 minutes, Benzema started by scoring from the penalty spot, VAR having established that Iza had stepped on the foot of Vinicius, as he smashed the ball into the net past goalkeeper Jeremias Ledesma, and only three minutes later it was again Benzema, crossing for the full-back Odriozola to head in at the far post.

Casemiro blasted over the bar shortly after, again teed up by a header by Benzema, with the same two players acting in reverse to net Benzema’s second of the night, on 40 minutes, to make it 3-0, with a good strong header into the Cádiz net.

Four changes were made by the home side during the break, and they came out with renewed vigour, as Choco Lozano went close with a header, but the match was in the bag for Zidane, allowing him to bring on three pairs of fresh legs, giving Dani Carvajal a run out after returning from injury, along with Asensio, and Isco, as reported by marca.com.