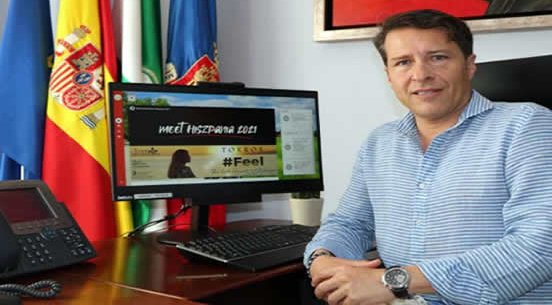 Óscar Medina, the mayor of Torrox, with Paula Moreno, the councillor for the Treasury,  announced on Thursday 29 the Town Hall’s plan to offer free bus transport for the residents of the municipality of Torrox.
Standing at the location on the border with neighbouring Nerja, where a new bus stop will be built, the mayor explained how though the use of a new GPS mobile phone app, passengers will be able to check bus timetables online, and also through digital panels that will be installed in each bus stop.
A new bus that will join the fleet was also unveiled, specially modified to include a ramp for people with reduced mobility, and the incorporation of USB charging points in every seat of the bus.
Said Mr Medina, “We are going to be the first municipality on the Eastern Costa del Sol in which its neighbours will be able to make use of public transport completely free of charge”, explaining that passengers to use the free service, they must simply present a card – which will be provided to all residents on request – upon entering the bus, to show they are a resident of Torrox.
One benefit of this scheme said the mayor is to help benefit the environment by reducing the road traffic, thus creating less air pollution, whilst “also regulating road traffic and avoiding circulatory collapses or parking problems”.

He added, “although this commitment of the government team to public transport will mean an extra cost for the municipal coffers, it can be carried out due to the good economic management, thanks to which, we have Zero Debt, and that allows us to carry out the practice of projects that until now had never been carried out in the municipality in different areas, both in the conservation and maintenance of cultural heritage and in the creation of new sports spaces or infrastructures and asphalt in different residential areas and, of course, the tan expected funeral home”.
Mr Moreno also spoke, explaining that free public transport in Torrox, “will mean an extra cost of 140,000 euros for the Town Hall, but we are convinced of the great advantages that this entails because we are going to improve the day-to-day life of our neighbours and that of our businesses, by providing them with a better connection with all parts of the municipality”, as reported by 101tv.es.
The Euro Weekly News is running a campaign to help reunite Brits in Spain with their family and friends by capping the costs of PCR tests for travel. Please help us urge the government to cap costs at http://www.euroweeklynews.com/2021/04/16/ewn-champions-the-rights-of-brits-in-spain-to-see-loved-ones-again/