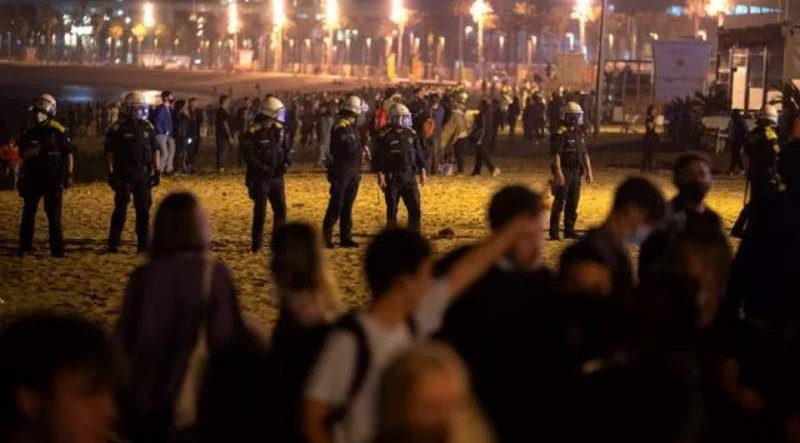 Large crowds gathered on beaches in Barcelona over the weekend. image: Twitter

Barcelona Hospital Treated 10 Times More Cases Of Alcohol Poisoning Than Covid Patients Over The Weekend.
Young people took to the streets of Barcelona over the weekend to celebrate the expiration of the curfew, but without remembering that in all of Catalonia the Superior Court of Justice imposed a limit of six people for gathering a few days ago and also the closure of bars at 23.00, according to a report from 20 minutos.

Robert Güerri, the Covid-19 hospitalisation coordinator for the emergency services of Hospital del Mar in Barcelona, said staff treated between 15 and 20 people with serious intoxication from consuming alcohol and drugs in just 24 hours.

Güerri commented that there were concerns about people’s emotional and mental health and stated that the situation was still ‘very fragile’.

“In general people in my area have been very responsible,” said Oriol Estival, a 22-year-old from Sant Celoni, a village around 50 kilometers (31 miles) from Barcelona. “Large crowds have occurred in large cities like Barcelona or Madrid. People know the places where there are no police.”

A geography student at the autonomous university of Barcelona, Estival said he saw groups of six drinking at the park in his town, but nothing like the partying seen in videos around Spain.

After a strict stay-at-home order last spring at the start of the pandemic, Spain’s second state of emergency went into effect last October. It allowed more activity but still included a nationwide late-night curfew and restrictions on social gatherings and travel within Spain.