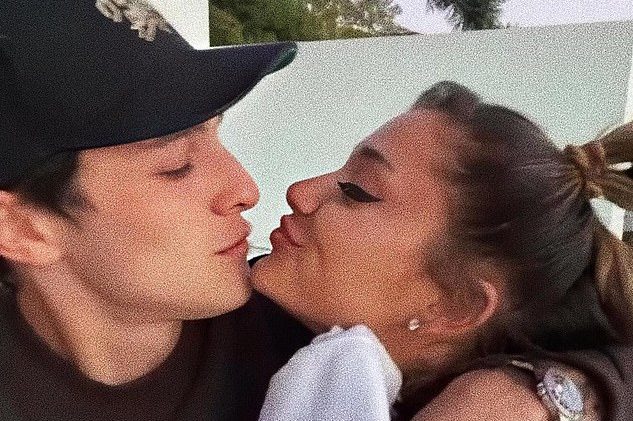 Ariana Grande married her fiancé Dalton Gomez in secret. The 27-year-old singer is said to have married the 25-year-old real estate agent at her $6.75 million home in Montecito, California, over the weekend.

It comes after Ariana revealed in December that she and Dalton had been dating for nearly a year and were engaged.

A representative for the singer confirmed to PEOPLE on Monday night: ‘They got married. It was tiny and intimate – less than 20 people. The room was so happy and full of love. The couple and both families couldn’t be happier.’

Despite the reduced celebrations, Ariana and Dalton, a real estate agent, are said to have exchanged typical “I dos,” according to TMZ.

The Grammy winner’s secret ceremony took place at her California home, according to a source close to her. Her neighbors include Oprah Winfrey, Ellen DeGeneres, Prince Harry, and Meghan Markle.

Ariana is said to have paid $6.75 million for Ellen’s former residence, a unique 5,500-square-foot Tudor-style mansion.

The source also said that the ceremony was really just for them,’ but it’s unclear if this was a spur-of-the-moment decision or whether they had arranged the big day in advance.

Meanwhile, another source has claimed to E! that the pair ‘always wanted an intimate ceremony,’ saying: ‘They decided to have the wedding this past weekend because their schedules are picking up and neither wanted to wait.’

‘They both agreed there was no point in waiting,’ the source went on. According to the paper, the ceremony was held in Ariana’s backyard with hundreds of white and light pink florals.

‘It was beautiful but not over the top,’ the source told E!. ‘Ari wanted it to be simplistic and tasteful. All they cared about was having family there and to be able to enjoy the special moment together.

Dalton, Ariana’s new husband, is said to have assisted in the creation of the diamond and platinum wedding band he gave her.

According to a spokesperson for E News! on Monday, the real estate agent collaborated with jeweler Jack Solow on the wedding band for the 7 Rings singer.

As reported by Daily Mail