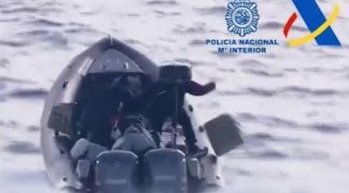 SPEEDBOAT flees for Morocco from Spain before engine explodes and drug-trafficking occupants are forced to throw themselves into the ocean.

Four members of the speedboat crew have been arrested by National Police officers and officials of the Customs Surveillance of the Tax Agency. The officers were able to thwart a drug run in Spain’s Almeria, that ended with the speedboat fleeing for Morocco before an engine exploded.

National Police and the tax agency were expecting drugs to be brought into Almeria early in the morning on May 14. Police officers attempted to locate the drug traffickers by both air and sea. They were also searching for where the boat would land.

The tax agency spotted the boat at around 4am from the air when it was about two nautical miles from the airport in Almeria. The boat was seen to be heading at high speeds towards the Almeria coastline and was around 15 metres in length. The speedboat also had multiple outboard motors which meant that it could travel at high speeds.

The boat’s occupants began to throw the drug bales overboard and set off towards Morocco after they were spotted. They fled at high speed changing course multiple times, but as they were around 20 nautical miles north-west of Alboran Island they got into trouble.

At around 6.15am one of the speedboat’s engines exploded and the four people that had been in the boat were forced to throw themselves into the ocean in a bid to escape the explosion.

A patrol boat quickly rescued the four people and they also collected one of the bales of drugs which was found to contain 30 kilos of hashish pollen.

Two of the men had been taken to Almeria’s Torrecárdenas Hospital as they were injured. All four men were arrested though and are of both Moroccan and Spanish origin as reported Almeria 24.

They were remanded in custody and accused of a drug trafficking offence.