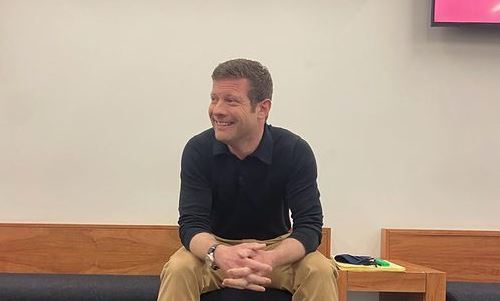 Dermot O’Leary was in hysterics over a Boris Johnson sex comment made on Monday’s This Morning show.

Bev Turner and Matthew Wright had been invited onto the show to talk about current news which obviously included Boris Johnson’s surprise wedding. Boris married Carrie Symonds on Saturday, May 29 and has made numerous headlines since then with the secret wedding. The ceremony was held at Westminster Cathedral.

Bev Turner believes that the timing of the wedding could have been better though. Matthew spoke of the wedding filling all the newspapers and Bev commented that: “One might say that that may not be accidental because, of course, all the front pages are full of Carrie and her slightly oversized flower hat today, her crown.”

Dermot hit back with: “Meow!”,  “She does look nice though, everything can’t be about what she’s wearing?”

Bev then shocked everyone with her comment: “No, of course not but every time I see them I just think, ‘she has to have sex with Boris Johnson!'”

The shock comment left Dermot, Alison and Matthew laughing out loud. She went on to add: “Like on a very trivial level, it just turns my stomach on that basic level, but on a more political level… I think the timing is just appalling,”

She later argued that the timing of the event was bad as: “Look, everybody deserves to be happy in their private life, I wouldn’t disagree with that but I just think today is a huge day for the country because bailiffs can go in and seize property again, from today houses can be repossessed, i just think the timing is awful.”