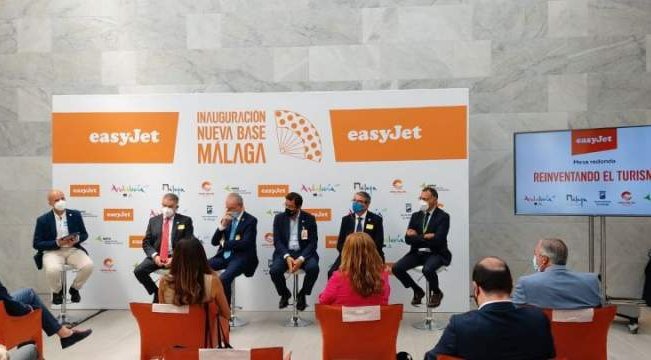 THE inauguration of the easyJet Malaga base, the company’s third base in Spain after Barcelona and Palma is good news for tourism in the Costa del Sol and Axarquia.
Although the base started operation on June 1, it was formally confirmed by the Diputación de Malaga on June 8 and inaugurated with the traditional arrival of an easyJet Malaga liveried aircraft and ribbon cutting by representatives of the airline and the authorities of the region.


Following this was a round table discussion entitled “Reinventing tourism” attended by the president of Costa del Sol Tourism, Francisco Salado, Manuel Pablo Muñoz, Secretary General of Tourism of the Junta de Andalucía, Francisco de la Torre, Mayor of Malaga, Pedro Bendala, director of Malaga airport as well as Javier Gándara, easyJet’s general manager for southern Europe.
In addition, Teófilo Ruiz, Subdelegate of the Government in Malaga, offered some words of welcome as the discussions took place.
The president of Costa del Sol Tourism said “today we celebrate a historic day in which easyJet’s commitment to our destination is manifested” and was excited by the fact that the inauguration of the easyJet Malaga base is good for tourism
He then added that “it is true that we are facing the terrible economic consequences of the pandemic and travel limitations, but I am convinced that the moment we leave the disease behind, the take-off from Malaga will be extraordinary. It already is.”
But little of that would be possible, according to Salado “without the first-rate equipment with which we find ourselves. Without an international airport like Malaga, with direct connection to 113 cities and 32 countries, Malaga would not be set up as the great place to invest, work and live.”
He further observed that “connectivity is essential. Because Malaga and the province have become one more neighbourhood of London, Brussels, Berlin, Amsterdam, Stockholm, Paris, Zurich, Manchester, Dublin … We are two or two and a half hours away by air from the great capitals of Europe. And if you give a Briton, a Swede or a German a choice of where they want to live and work, many will choose the Costa del Sol”
The number of airline seats to the Malaga destination for journeys from June to September is close to 3.5 million which represents a growth of 1.7 million seats over 2020.