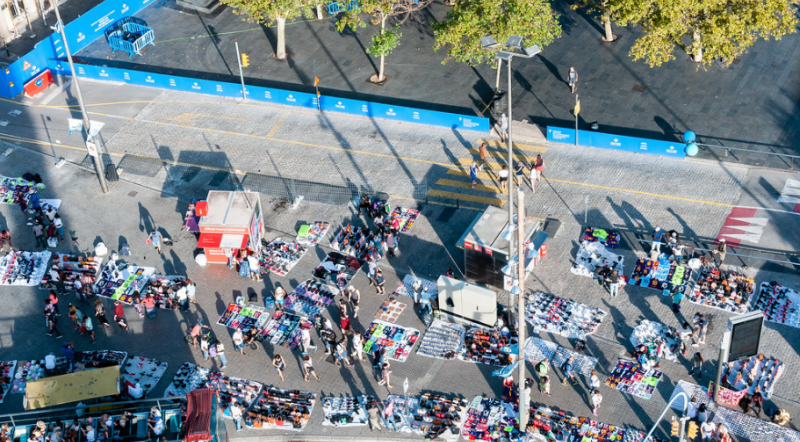 Barcelona’s street vendors have set up a co-operative to launch a line of trainers under the brand name Top Manta.

FOLLOWING years of selling cheaper replicas of designer shoes and handbags, Barcelona’s street vendors have now set up a co-operative to launch a line of trainers under the brand name called Top Manta.

After an earlier attempt in 2017 to establish the brand, in which logos were stuck onto shoes made in China, these trainers are made in Alicante, Spain, and Porto, Portugal.

A spokesman from Top Manta, Lamine Sarr, said: “We have always been criticised and persecuted for selling copies, but now we have our own brand,” reports the Guardian.

The brands’ launch showcased their Ande Dem trainers, which means “walking together” in Wolof, a language that is spoken by most vendors (manteros), who are from Senegal.

The brand name, Top Manta, is derived from the word blanket (manta) on which vendors lay their goods. The logo features a blanket, however, it also represents waves to signify the fact that most vendors made the dangerous journey across the sea in small inflatable boats to arrive in Spain.

The colours of the shoes reflect Africa, Sarr explained, and their durable soles make them more suitable for working on building sites or land rather than for jogging or running.

A group of vendors, with the assistance of a local designer and architect, Sara González de Ubieta and a graphic designer, Helga Juárez, designed the shoes.

Top Manta said it has opted for responsible production, unlike many big brands that use mass production in low-income countries.

“We’re very happy that we’ve got the Ande Dem shoes. It’s a dream come true,” said Abdou Lahat Wade, who will soon be selling them.

“We’re showing those people who always said we weren’t capable of making our own shoes that we can.

“We’re like a brotherhood and that gives us strength and the perseverance to cope with the present and create a future for ourselves.”

“It’s been really difficult during the pandemic,” Sarr explained. “These are people who can’t claim unemployment benefit and there’s been no government support. We established a food bank and we set up sewing machines and people came here to the shop to work on a voluntary basis sewing shoes and clothes.”

The laws in Spain mean that illegal immigrants are condemned to a marginal existence, with obtaining legal residency very difficult. Top Manta has created jobs in manufacturing and marketing shoes, which has meant they have succeeded in getting 120 vendors legal residency and 25 of its members now have jobs. The brand also offers training in screen-printing and textiles, as well as language classes.

Four hundred pairs have been produced so far, with a retail price of €115 (£100). All profits will help towards building the brand and the trainers can be bought online or at the co-operative’s shop in Barcelona.