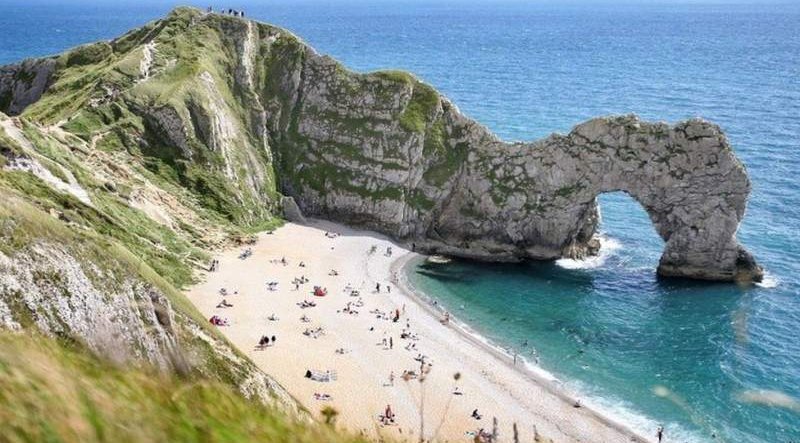 Horrified Beachgoers Watch In Horror As Woman Falls 150ft To Her Death From Cliffs.

Horrified beachgoers watched on in horror as a woman plunged to her death from a cliff near Durdle Door, on the Jurassic Coast near Lulworth in Dorset, England. The Maritime and Coastguard Agency (MCA) said it had received multiple 999 calls about the incident.

A witness at the scene, Michelle Attard, from London and visiting Durdle Door, said: “There were two helicopters and police trying to find out how someone slipped off the edge of the cliff. Such a sad event to witness.”

According to reports, emergency services, including police officers, ambulance crews and firefighters, were called in response to a ‘person falling from height’ at Man O’War beach at 3.07 pm today, Monday, June, 14.

Another witness said there was a ‘large’ emergency services response as vehicles rushed to the scene.

Dorset Police say the woman was pronounced dead at the scene by paramedics. Police officers are now investigating the circumstances of this death and have launched an enquiry to understand what exactly happened.

A spokeswoman for Dorset Police said: “At 3.07 pm on Monday, June 14, 2021, Dorset Police received a report that a woman had fallen from a cliff at Durdle Door near Lulworth.

“Officers are attending together with other emergency services colleagues. Sadly, the woman was pronounced dead at the scene. Officers are investigating the circumstances of this tragic incident.”

A spokeswoman for Dorset and Wiltshire Fire and Rescue Service confirmed that fire crews from Bere Regis, Dorchester and Weymouth were quickly at the scene to support emergency services.

She said: “We were called at 3.14 pm after reports that someone had fallen from height at Man O’War beach. We have crews from Bere Regis and Dorchester in attendance, along with a technical rescue team from Weymouth.”