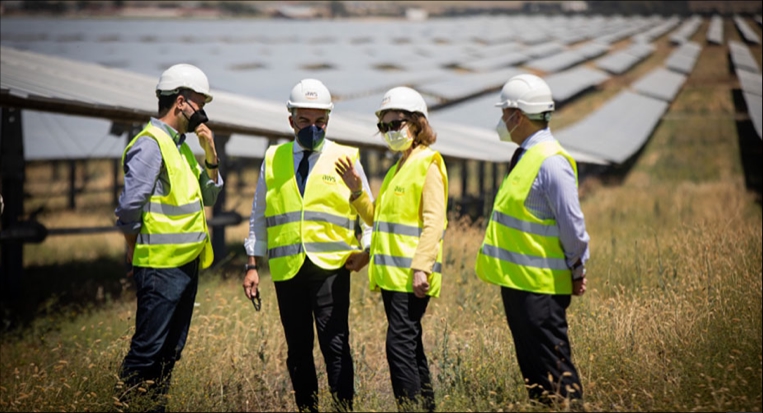 THE Minister of the Presidency, Public Administration and Interior, Elías Bendodo, has stated that the Governing Council will approve the Internationalization Strategy of the Andalucian Economy for the period 2021-2027 at its meeting next week.

During a visit to the Amazon solar plant, in the town of Alcala de Guadaira, Sevilla, Bendodo explained that the Strategy for the Internationalization of the Andalucian Economy is a tool with which the Andalucian Government unifies all its policies, programs and actions to promote the internationalization of the business fabric and attract foreign direct investment to the province.

“We want to take a new leap forward in foreign trade and become a highway for investment,” added the Minister of the Presidency, who stressed that the ultimate goal is “to increase the weight of exports in regional GDP and create wealth and employment in Andalucia”. Along these lines, he insisted that the priorities of the Andalucian Government are to create jobs, attract investment and advance the vaccination strategy. “Andalucia has managed to lead the number of self-employed in Spain and we are going to follow the same strategy with exports. We are already leading some sectors and we are going to continue working in this regard,” he explained.

Bendodo explained that the Andalucian Government is committed to a sustainable reactivation of the economy, following in the footsteps of the Green Revolution with which.  the president, Juanma Moreno, is committed. “Thanks to the privileged position that we have in Andalusia, the Green Revolution is an opportunity for the creation of employment and wealth that we are not going to miss,” he said.

He stressed that the commitment to photovoltaics is perfectly compatible with defending the Andalucian countryside, before specifying that in Andalucia there are 706 renewable energy projects in process, for a total of 21,000 megawatts and that represents about €17,000 million, of which 92% are photovoltaic projects and 7% is wind.

In the same way, Bendodo has stressed that to defend and promote the sustainability of the province, the Government has already approved the Andalucian Energy Strategy 2030, which sets the guidelines for the gradual reduction of primary energy consumption and to contribute to renewable energy sources with at least 42% of gross final energy consumption being the goal for 2030.