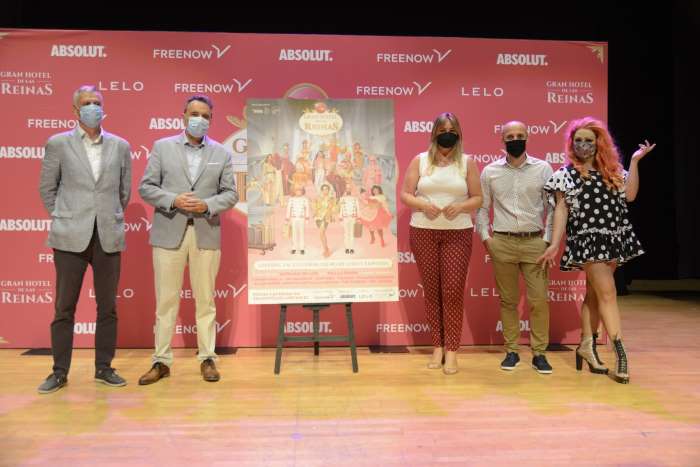 IN what is considered to be a ground braking event for Spanish TV, some of Spain’s best drag queens will spend the summer in Torremolinos.
A very special show ‘Gran hotel de las Reinas’ will begin its tour in Torremolinos on 31 July and run until 28 August bringing on stage some of the best drag acts on the national scene.
“This summer the town opens again, a town in which no one hides because we are a space where everyone can express their freedom and diversity.
“Therefore the ‘Grand Hotel of the Queens’ will be a key activity that complements tourism, because we are not just a destination for sun and beach, here people come to enjoy, to be happy and excited, so I had to start the tour here”, explained Mayor Ortiz in the presentation that took place in the Municipal Auditorium which will host the different functions.
This will be a show that includes dance, humour, live music and audience participation and there will be a huge selection of top acts and those attending will be able to enjoy appearances from Paca la Piranha, Supreme de Luxe and the drag artists Arunta Castilla La Mancha, Carmen Farola, Doviak Nurmi, Drag Volcano, Humacao Create, Inti, Killer Queen, Pupa Poisson, Sagittarian and The Macarena plus others.
“There was no better place to start this tour than Torremolinos. We are going to give visibility to some artists who have been working for years and now with this form of entertainment on television the artists will be recognised”, explained the general director of Atresmedia Eventos, Pablo López-Barajas.
The specific dates for the show are July 31, as well as August 7, 14, 21 and 28 with tickets available via the website https://granhoteldelasreinas.es/.
“We had our eye on Torremolinos because we had seen its great commitment to diversity and it was a very clear match between the city, the Council and us,” said the CEO of Locamente Factory, Ferrán Poca.
Finally, the drag artist Pupi Poisson, expressed the nerves and emotion that all the participants of the show harbour. “We have been hiding in bars and we are looking forward to doing our best. It’s going to be a before and after in Torremolinos and in Spain.”
Thank you for reading ‘Some of Spain’s best drag queens will spend the summer in Torremolinos.’