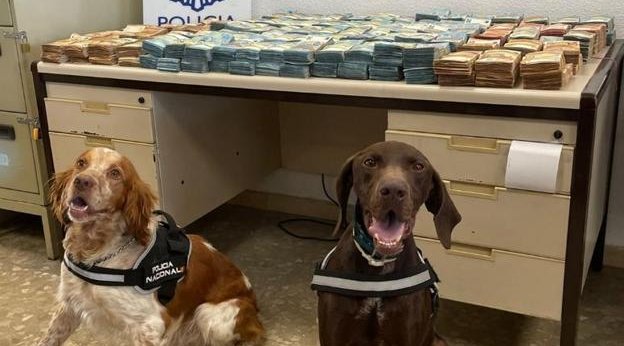 Two dogs from the National Police have detected a million euros that were hidden in the double bottom of a car boot.

The car was intercepted during a routine check carried out in Malaga this week, the driver now faces administrative sanction.
The National Police have explained that the woman who was driving the car could not provide proof for the transportation of this amount of money – a document that is necessary for movements of cash over 10,000 euros.
The dogs smelt out the hidden cash and instantly marked the right rear of the boot of the vehicle.
It was first suspected that the car had drugs hidden inside, however, after careful examination, a double bottom was found to contain numerous bundles of banknotes that were arranged according to their denominations.
The total amount of money seized was 999,630 euros, according to Diario Sur.
The news comes as officers of the National Police have arrested the parents of the 3-month-old baby in Malaga for alleged child abuse and serious injury.
The Minor Protection Service of the Junta de Andalucia has ordered the mother to enter prison whilst the father has been released with charges.
The provincial police station has reported that the father brought the child into the pediatric emergency department in Malaga on July 11 and saw obvious signs of abuse. He alleged the baby had accidentally slipped out of his arms, however, following interviews both parents gave contradicting stories.
According to investigations carried out by officers of the Group of Minors of the Provincial Police Station of Malaga, the baby was treated at the hospital with a fractured femur in his left leg and a fractured right tibia.