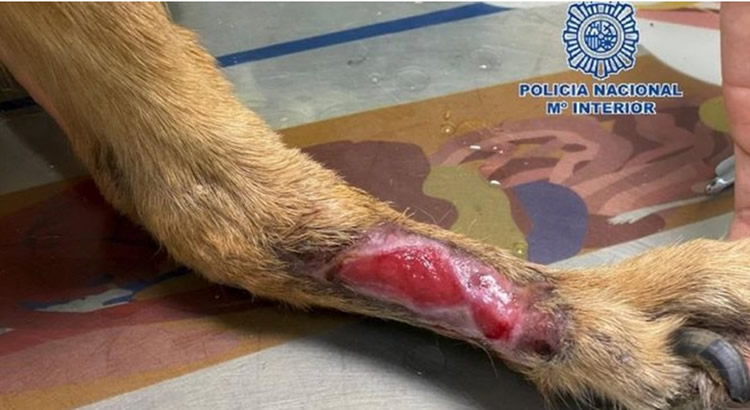 National Police officers in Velez-Malaga have arrested a 62-year-old resident of the town for the crime of alleged animal abuse towards her dog, after she was found to have been keeping the dog in a deplorable, neglected condition, on the terrace of her home, without providing it with the veterinary assistance it was clearly in need of.
As reported by the National Police in a statement, whilst they were out on patrol in the municipality, the dog was spotted in an exterior terrace of a property, by officers of the Provincial Police Station, and on inspection, discovered to be suffering from an open wound on one limb, showing signs of malnutrition, with an infection in the eyes, and wounds in its ears, among other obvious ailments and health problems.

When approaching the dog, the police officers saw that he was lying on some towels soaked in urine, displaying a malnourished appearance, with an ulcerated wound on one leg.

Continuing with their investigations, the officers interviewed the owner of the animal, who reportedly stated that she had picked it up from the street six months ago and that since then she has “looked after” it, while explaining that she kept it on the terrace – despite the high temperatures of the summer season – because she did not want the dog, due to his condition, to be inside with her grandchildren.

To save him, the agents confiscated the dog and took it to a veterinary centre, where, according to veterinary reports, the animal had malnutrition, an open wound on the left hind limb, lesions on its ears, and in its eyes showed signs of leishmania disease, peeling of the skin all over the body, among other health problems, at which point the dog owner was arrested for a crime of alleged animal abuse, and the dog was housed in a shelter in the Axarquia, as reported by laopiniondemalaga.es.