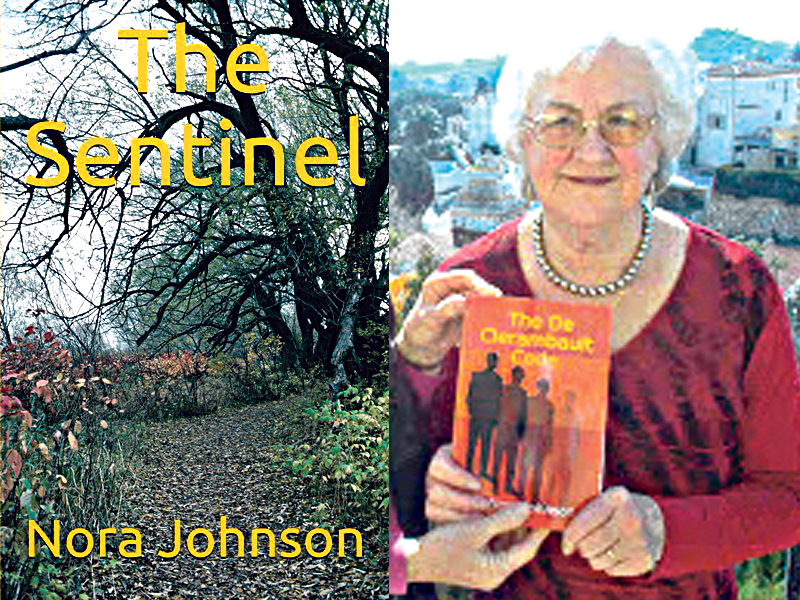 The latest book in the series and the late Joan Hunt with a copy.

It’s not often I’m left speechless, but that’s precisely what happened during a previous appointment with my gynaecologist in London. As soon as all the medical stuff was over when I last saw him, he reminded me what he said then: “That novel of yours really could have been about me!”

As I said, I was speechless, having no idea he even knew about my debut novel, ‘The De Clerambault Code’ (which I’m pictured here presenting outside her Benalmadena office to Joan Hunt, founder of the Costa del Sol Cudeca cancer charity who sadly passed away recently), let alone had read it or the others. (Every single one, as it turned out.)

Anyway, just like the main character in it, he described how, over several months, he too had been obsessively stalked by a patient who sent him aggressive emails ending up in blackmail. Eventually, he referred himself to the General Medical Council – and subsequently totally cleared by the medical tribunal.

Phew, what a personal story, which hit the national headlines! There wasn’t time to mention that I’d also been stalked – in Los Angeles – an experience that resulted in the obsessive delusional relationship depicted in my novel. Nor that studying law there, specialising in criminal law, led to my growing passion in writing the psychological crime thrillers featuring investigative journalist Alice Myers and DI Barbara Forster – or ‘DI Barbara’ as my Audible reviewers call her (all profits to Cudeca as you know), including the latest in the series, ‘The Sentinel’.

No time either to mention the colourful years I spent in LA. Apart from bit parts in movies (the English accent was wot dun it!) and meeting famous actors – Paul Newman (those eyes!), Harrison Ford (that smile!) and others – there were also some dodgy moments. Like the morning when I rushed into Law School and a Tax Law Professor was gunned down right in front of me! This shortly after J D (Juris Doctor) Finals.

Nora Johnson’s psychological crime thrillers ‘The Sentinel’, ‘No Safe Place’, ‘Betrayal’, ‘The Girl in the Woods’, ‘The Girl in the Red Dress’, ‘No Way Back’, ‘Landscape of Lies’, ‘Retribution’, ‘Soul Stealer’, ‘The De Clerambault Code’ (www.nora-johnson.net) available online as eBook (€0.99; £0.99), Apple Books, paperback and audiobook.