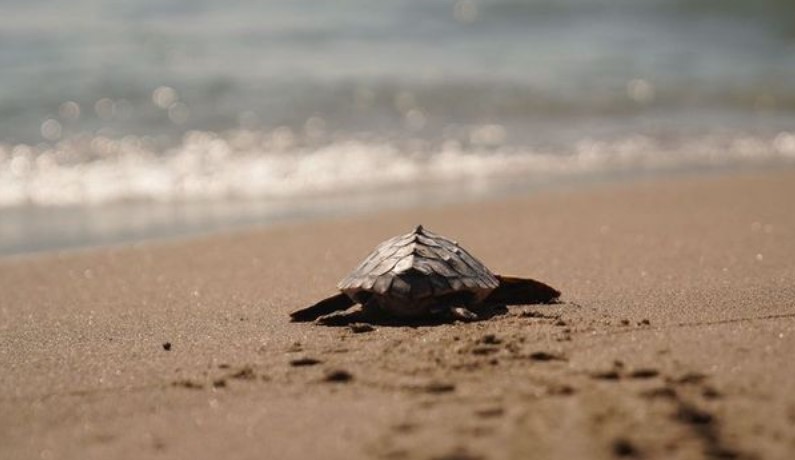 Last September, the eggs from fifteen rare loggerhead turtles were found on the beach opposite the Yaramar Hotel in the Costa del Sol holiday resort of Los Boliches, and during the last twelve months, those eggs have remained safe in recovery centres in the Andalucian cities of Algeciras and Sevilla, from which, 30 healthy baby turtles hatched and were cared for.
On Sunday, August 1, fifteen of those turtles, now almost one year old, were released into the sea in a special ceremony that took place on a beach in Fuengirola, presided over by Juanma Moreno, the president of the Junta de Andalucia, accompanied by Carmen Crespo, the Minister of Agriculture, Livestock, Fisheries, and Sustainable Development, and the mayor of Fuengirola, Ana Mula.
During the ceremony, Mr Moreno reiterated the Andalucian Government’s commitment to protecting biodiversity and the environment, and appealed to Andalucians to become aware of, and protect, the marine and terrestrial environment, as he commented on the turtles, “it is unusual for a turtle loggerhead to make its nest to the west of the Mediterranean, so it looks like climate change has a lot to do with this alteration in the behavior of the species”.
He continued, “Nature is one of our greatest treasures, and climate change, one of the most serious threats we face, which is why we need to advance with the Green Revolution”, pointing out that the Andalucian Government is investing in projects such as Ecomares, in which €10 million has been earmarked, for the protection and cleaning of the Andalucian coastline.

Also referred to was another important initiative, that of combating single-use plastic bags in Andalucia, a protocol that the Andalucian Executive signed with businessmen more than a year ago, “The viability of many marine species is in the hands of man. We have to raise awareness, because many essential species for the vital and fundamental environment within the biological balance of the marine and terrestrial environment are being lost and we can only avoid it if we all work and collaborate”.

Finally, thanks were given to the work of volunteers, environmental agents, people from the Doñana Station, Civil Protection, Local Police, the Aula del Mar, Bioparc, and the Asociacion Hombre and Territory, who assisted in watching over the turtle eggs until they had hatched, as reported by laopiniondemalaga.es.