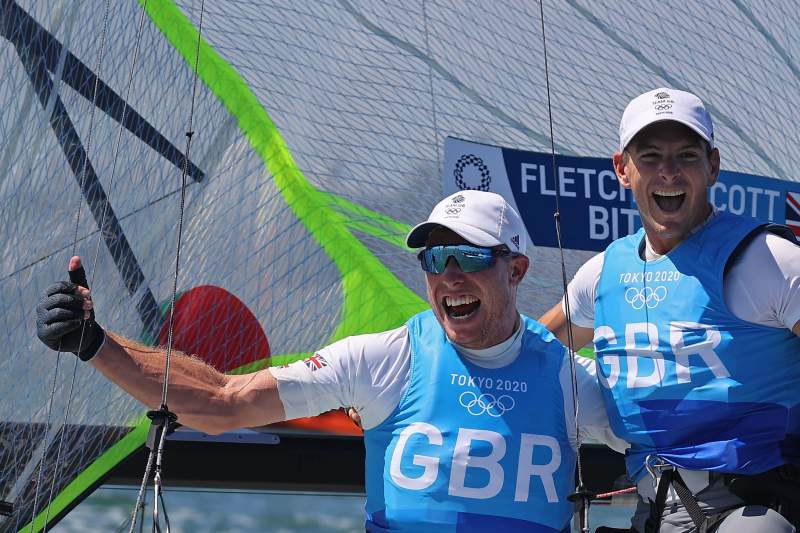 Team GB have won sailing gold in the men’s 49er class. Britains Dylan Fletcher and Stuart Bithell entered the final medal race in second, four points behind New Zealand’s Peter Burling and Blair Tuke, however, victory for Fletcher and Bithell and third for New Zealand saw them claim the title.

The pair kept their cool in the scorching conditions of Enoshima Harbour to overtake the defending champions and two-time America’s Cup winners Pete Burling and Blair Tuke to take the gold.

It was Fletcher’s first Olympic medal after he finished sixth with Alain Sign in the same class in Rio, while Bithell took silver in the 470 class alongside Luke Patience at London 2012.

Until the very last moments of the race, it was still unclear whether the gold would go to as the British boat, who battled with the German pairing of Erik Heil and Thomas Ploessel all the way to the line.

The Kiwi duo could only watch the race unfold some 15seconds back in third as GB edged it by two seconds but, on screen, what looked like just a matter of centimetres.

The medal was a huge boost to Team GB on a big day of sailing after Charlotte Dobson and Saskia Tidey failed to climb into a medal position having finished 14th in their women’s 49er FX medal race.

After winning their first two races things fell apart as they earned 13-16 place positions in races seven to 10, they eventually finished in sixth place overall.

Emma Wilson won the team’s first sailing medal on Saturday with bronze in the women’s windsurfing.