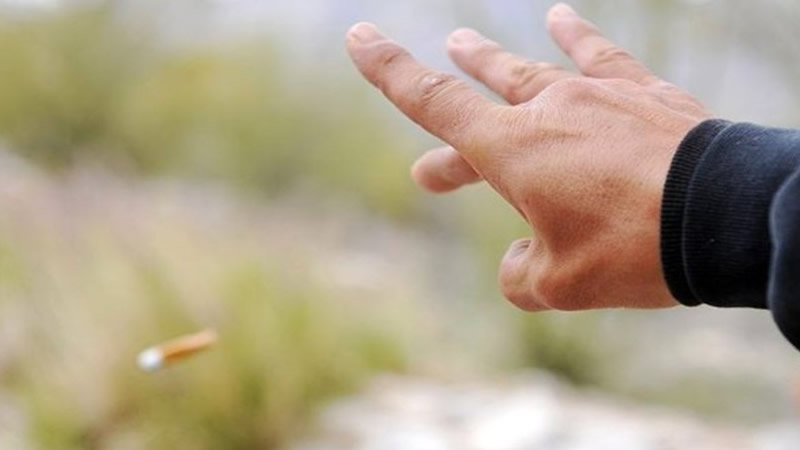 Throwing lit cigarettes from a moving car can get you up to six years in prison. image: wikimedia

This Summer has seen some terrible fires across the country, where it seems hardly a day goes by without another one being reported, such as the massive blaze in Navalacruz in Avila – which has already been recorded as the worst-ever in Castilla y Leon, and reportedly the third or fourth-worst in Spanish history – or the one in the Canarian town of El Paso, on the island of La Palma.

As a result, the Guardia Civil has taken to its social networks to remind the public of the importance of not throwing rubbish from the car window – even when parked up – especially glass bottles, or cigarette ends, which can act as the perfect incendiary device to start a large fire.

Smoking behind the wheel of a vehicle is not prohibited, but, discarding a lit cigarette end is, and according to data from the Ministry of the Environment, 3 per cent of fires originate from abandoned cigarette butts thrown from vehicles, which might seem a small percentage, but when you consider the damage a big fire can do, then you should really refrain from doing such a thing, because the fine, if caught, is €200, and four points off your licence.

That fine is only if you are seen throwing the cigarette end, but, should your action result in the starting of a fire, then, as the force says in its tweet, “If there is a forest fire, and we catch you, up to 6 years in jail”.

As the General Directorate of Traffic (DGT) explains through its website, beyond the danger smoking can cause to forestry, smoking at the wheel also poses a risk both to the driver himself and to the rest of the people in that car, because it takes on average, 4.1 seconds to light a cigarette, and if you are driving at 100kph, you will travel 113 metres without paying full attention to the road.

According to Dr Jose Luis Diaz Maroto, the coordinator of the smoking workgroup of the Spanish Society of Primary Care Physicians (Semergen), smoking it requires between three or four minutes, which means spending six kilometres with only one hand placed on the steering wheel.