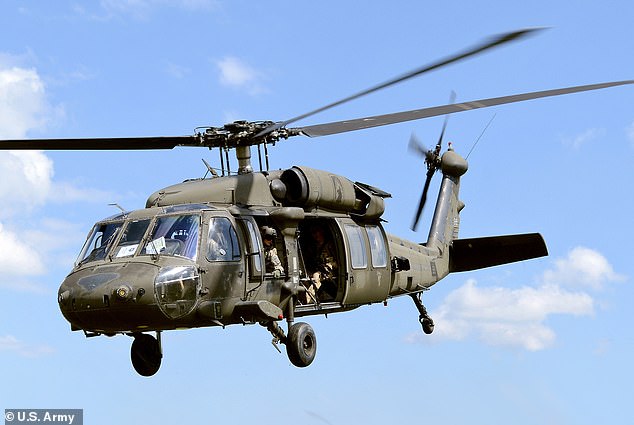 Terrorists Taunt the US by flying a captured $6million Black Hawk helicopter over Kandahar city.

The footage was shared on Twitter by an account referred to as Talib Times which claims to be the official information supply for the Islamic Emirate Afghanistan.

The unverified footage exhibits a person hanging from a helicopter because it flies over Kandahar forward of the US’s exit from Afghanistan.

It comes days after footage emerged of the Taliban testing a captured Black Hawk helicopter by taxi-ing it round an airfield. The group additionally launched propaganda footage of physique armour-clad ‘particular forces’ with night-time goggles.

The caption reads: ‘Our Air Force! At this time, the Islamic Emirate’s airpower helicopters are flying over Kandahar metropolis and patrolling the town.’

Earlier this month, US National Security Adviser Jake Sullivan admitted the US would not actually know if all $83bn (approx €70bn) of military stock left in Afghanistan might now be within the hands of the enemy.

However, a number of retailers have estimated the haul contains at least 22,000 Humvees supplied to Afghan forces between 2003 and 2016.

Taliban fighters have since been pictured sitting atop the vehicles in Kabul.

The equipment given by the US to the Afghan Army now more likely to be in hands of the Taliban additionally contains 50,000 tactical automobiles, 1,000 mine resistant automobiles and 150 armoured personnel carriers.

The US additionally donated at the very least 200,000 firearms to the Afghan military, together with M24 sniper rifles, M18 assault weapons, anti-tank missiles, automated grenade launchers, mortars and rocket-propelled grenades.

The United States completed its withdrawal from Afghanistan tonight, Monday, August 30, ending America’s longest war after 20 years, closing a chapter in military history that will likely be remembered for the loss of more than 1,400 American lives, colossal failures, broken promises, and a frenzied final exit that cost the lives of more than 180 Afghans and 13 US military personnel.

This final evacuation took place just hours before President Joe Biden’s deadline of Tuesday, August 31 approached, with that final aircraft bringing the curtain down on America’s spell in the Asian country, as Air Force transport planes carried the last remaining contingent of troops from Kabul airport, leaving Taliban forces firmly in control, reportedly firing their weapons into the air as the last flight took to the sky.