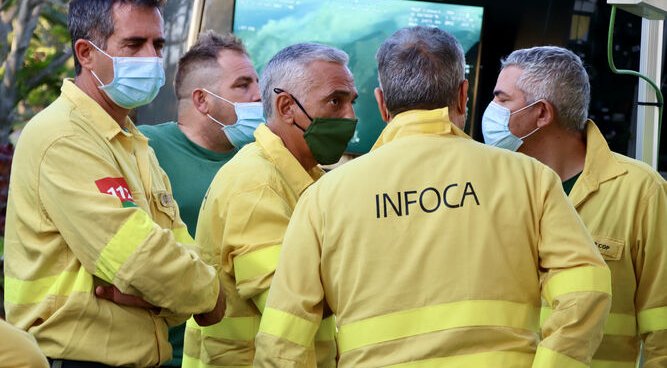 Thirty firefighters continue their work to finally extinguish the Sierra Bermeja fire.
The work in extinguishing the forest fire declared on September 8 in Sierra Bermeja that has severely affected several Malaga municipalities, continues for another day with around thirty troops mobilised involved from the Infoca Plan.
As reported by Infoca, 25 forest firefighters, two environmental officers and two fire engines are deployed across nearly 10,000 hectares of land that have been affected by the flames

The extra precautionary work carried out during the early morning hours of this morning, includes a rise to 34 firefighters, together with two environmental officers and another fire engine added, making a total of three.

This Saturday is the tenth day fighting the fire that has been classified as a sixth generation emergency, The fire led to the activation of level 2 and the evacuation of more than 2,600 residents in the area, most of which have returned to their homes.

The fire also sadly claimed the life of a forest firefighter.

The fire is now being declared as level 0, and firefighters continue in the task of extinguishing any remaining hot spots. The good weather forecast for this weekend is accompanied by a warning from Infoca who said that there is still a high risk of forest fire, insisting once again on caution.