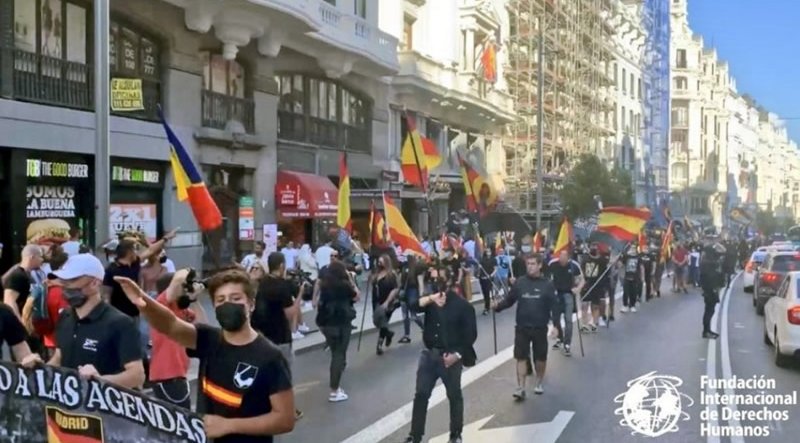 The Government in Madrid has pledged today, Monday, September 20, to impose administrative sanctions on the organisers of the demonstration that was held last Saturday, September 18, in the neighborhood of Chueca, during which homophobic slogans were uttered, a march promoted by the San Blas-Canillejas Neighborhood Association, under the slogan “Say no to the 2030-2050 Agendas”.

They have accused the said organisers of having “cheated” on the real reason for their demonstration, since, when asking for authorisation, they had originally claimed it was to protest against the 2030 Agenda, while finally using the opportunity to attack the LGTBI community.

After attending an informative breakfast of the New Economy Forum (NEF), along with, Hana Jalloul, the PSOE spokesperson in the Assembly, government representative, Mercedes Gonzalez, made the announcement, which was backed by former president, Jose Luis Rodriguez Zapatero, who labelled what happened during the march as “regrettable”.

Madrid’s Provincial Prosecutor’s Office has initiated investigative proceedings as a result of the events that occurred during the march, in which a group of protesters made homophobic chants such as “get rid of Madrid”, or “get out of our neighborhoods”.

Mercedes Gonzalez offered her “deepest rejection” of what was experienced, and has promised her “most absolute solidarity and affection” to the LGTBI group, which lately “is very vilified. I feel in my soul that these absolutely regrettable images had to live in our streets”, explaining that the Government Delegation “does not authorise demonstrations”, but is simply notified of the calls that there is one taking place, according to the right of manifestation of the Constitution.
But, she continued, this body “had no possibility of prohibiting the demonstration” because there was no information whatsoever that would indicate that “it was going to end as it ended”, and pointed out that “unfortunately”, the Delegation “cannot prohibit demonstrations simply because it does not share its objective” because the right to demonstration “prevails”.

Ms Gonzalez also pointed out that the convening association had previously organised other marches, with “very few numbers, just 50 people, and there had never been any type of altercation”, as reported by 20minutos.es.