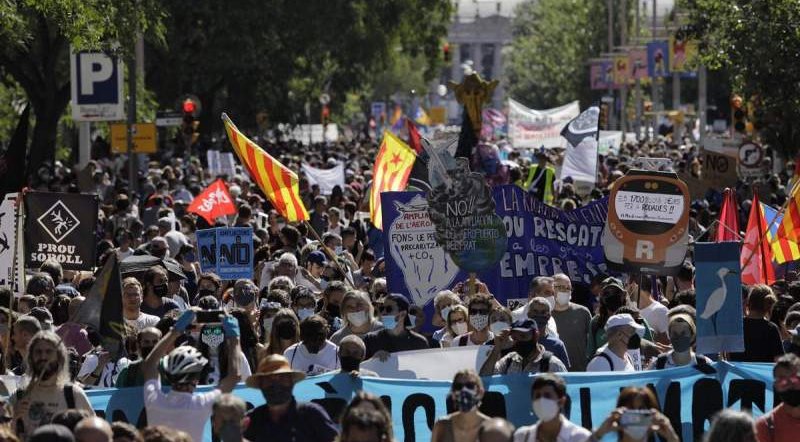 Thousands lined the streets of Barcelona over the planned El Prat airport expansion.

Thousands of people gathered in Barcelona to protest against the expansion of the El Prat airport, on Sunday, September 19, demanding a more sustainable economic model that is not based on intensive growth.

The protest, held on Calle Tarragona in Barcelona, brought together environmental organizations, social movements, all of whom are opposed to all kinds of new infrastructures in Catalonia. Police calculated an attendance of 10,000 people, a figure that the organisers raised to 90,000.

Members from the ZeroPort and Network for Climate Justice organisations joined forces with other groups from all over the region of Catalonia.

ZeroPort and Network for Climate Justice organisations are historic environmental and environmental associations, both groups are opposed to projects in Girona, Tarragona and the Pyrenees; so is the Unió de Pagesos union, who, along with many other organisations, are against anything that promotes mass tourism.

The motto of the protest is Extensions, no. Fighting for the climate, health and life. The protest was called long before the stoppage of the El Prat expansion was decided due to lack of political consensus and has been maintained to make clear the opposition of these organisations to any other project for the growth of this infrastructure.

The high point of the campaign for the protesters against the expansion was the invitation to the Vice President of the Government and Minister Yolanda Díaz to visit La Ricarda, an area of high environmental value that would be most affected by the planned expansion.