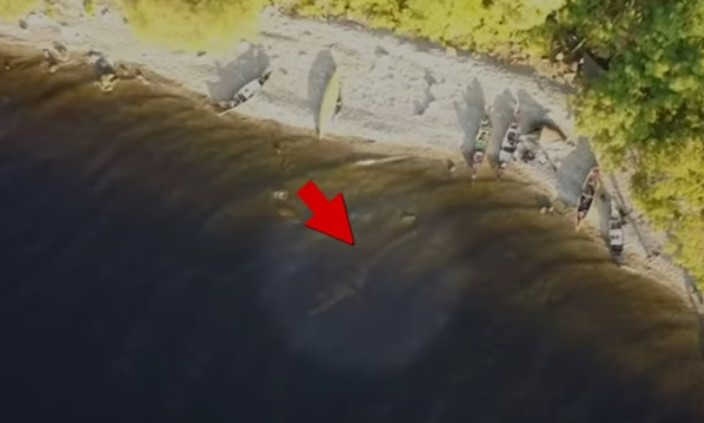 In drone footage taken by Richard Mavor, aged 54, a YouTuber from North Yorkshire, many of his fans are convinced that he may have inadvertently captured footage of the legendary ‘Loch Ness Monster’.

Richard runs his own YouTube channel called ‘Richard Outdoors‘, and he was recently on location in Scotland, at Loch Ness, where he was participating in the Great Glen Canoe challenge, where he raised £15,000 for the Alzheimer’s Society.

He was filming on the banks of the famous Scottish Loch, using a drone to take aerial footage of the expanse of water, which he subsequently uploaded to his YouTube channel, at which point he started receiving messages from subscribers pointing out that they had spotted what looked like ‘Nessie’ appearing in the water after around four minutes of his video.

Speaking with the Daily Record, he told them, “I couldn’t believe it. I had to rewind the footage several times and have watched it several times since. I don’t know what it is, but it certainly has the same shape as previous sightings of Nessie”

Adding, “The more I watch it, I think ‘crikey!’ there really wasn’t anything in the area that could be. There was no driftwood or anything like that so who knows”.

Comments on his video all contained the same topic, people saying they could see the famed ‘Loch Ness Monster’ near to the water’s edge, with one saying, “Richard, there is a shape in the water at 4 minutes and three seconds approaching the shingle beach, it was Nessie coming to wish you luck on the trip”.

Another commented, “I’m sure I could see Nessie at the shoreline at 4.00mins”, while one more said, “4 mins waters edge, the ripples look like Nessie”, as well as, “Was that Nessie I spied ‘neath the water early on in the film?”, as reported by thesun.co.uk.

Check the video for yourself, go to just before the 4 minute point below: