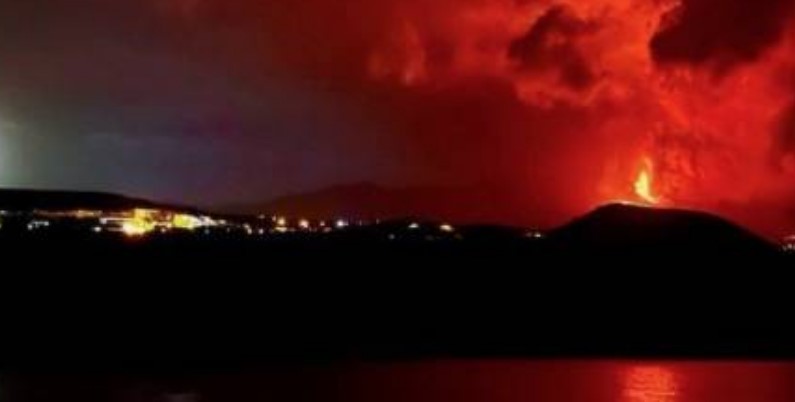 THE lava flow from the volcano on La Palma has now reached the town of Todoque, even consuming the church

As confirmed by the Geological and Mining Institute of Spain, the new stream of lava flowing out of the Cumbre Vieja volcano on the island of La Palma has already reached the front of the old one. This has enabled it to travel across the hard surface of the previous stream, allowing the lava to flow at a faster rate, estimated at an average of around 100 metres per hour.

During today, Sunday, September 26, the lava flow that had been creeping closer and closer has finally hit the town of Todoque, consuming homes, streets, shops, the health centre, even causing the collapse of the bell tower of the church of San Pio X.

Miguel Angel Morcuende, technical director of Pevolca, has reported the lava at one point during the afternoon travelling at as much as 400 metres per hour, with its front increasing in width. He also reported that the height of the wall of lava has reached between four and five meters (13 to 16ft), while in some sections it is actually as high as 15 metres (49ft).

The Pevolca director revealed that an inspection flight is scheduled for tomorrow, Monday, September 27, that will give a much clearer image of the destruction that has been caused so far in Todoque. After this surveillance, Pevolca will report the situation to the Town Council of Los Llanos de Aridane, to inform them of which structures are still standing, and those that are not.

Mr Morcuende has not dared to mention when he thinks – if at all – the lava will reach the sea, but it is currently around 1,500 metres away from the water’s edge. It is impossible to predict he says, as the stream does not always travel in a straight line, encountering obstacles like the banana plantations that slow its progress.

According to the Pevolca technician, a rough estimate has calculated that since first erupting last Sunday, September 19, the lava has already flowed approximately 3,200 metres from the mouth of the volcano to its current position, as reported by 20minutos.es.

A volcano on Spain's La Palma island continued to spew lava and ash, forming rivers of lava. The eruptions had shutdown the island's airport on Saturday due to ash, but it has since resumed operations. https://t.co/tuBI4fv7qF pic.twitter.com/g2p40ym3KV