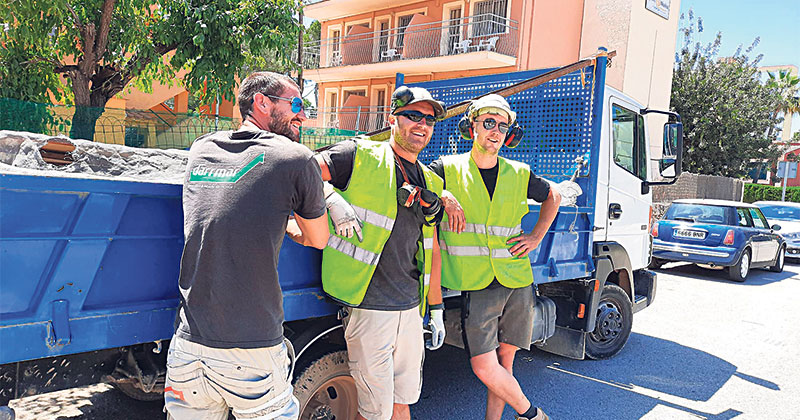 Mallorca based demolition and storage business, Darrmar Storage, is about to become a global name as it stars in its very own show, ‘The Wrecking Boys.’

Film crews have been following the antics of managing director Darren Hearne, wife Mary and their team as they manage their successful business on the beautiful island of Mallorca.

A loveable rogue with a big heart, Darren is originally from Peckham in South East London and lived in the London and Kent area until moving to Mallorca in 2008.

He set up his own rubbish clearance business when the council privatised the city of London’s rubbish for business and worked for many years around the west end of London with his own lorry and driver before meeting Mary on holiday in Marbella in 2004 and later moving to Mallorca together in 2008.

There, Darrmar Storage was born pretty much straight away when Darren discovered there was a niche in the market for waste removal in the way he does it.

In the very beginning it was just Darren and a van that initially was hired, getting business from adverts in the local papers and loading up several tons of waste himself and tipping it at the council run tip. Sometimes he only had a couple of jobs a week.

As the business has grown from strength to strength though, Darrmar has ended up with a large team that is like a family and no day is ever the same at the business.

They may be knocking down the odd wall, or pretty much a whole house, or kitchens. They could also be excavating land ready to build on or digging out a swimming pool. All these are the basics: getting an area clean and ready for the builders to go in and start a reform.

Other days they may be doing a house clearance perhaps where someone has bought a new place and the furniture has been left there or where a reform is taking place and they want to get rid of everything in the building.

This is part of the reason they came up with the idea of having a second-hand shop and storage facility as this goes hand in hand with their demolition work.

Since the business has grown, Darrmar has been starting to do much larger projects, but has not forgotten where they started and no job is too small or too big. They still get calls to take small amounts of rubble or remove a couple of household items and will fit it in.

Over the years Darrmar has employed many people on the island and know all of their staff personally, feeling like a big family.

Now a film crew has been on hand to capture some of the fun and camaraderie of the Darrmar team for new show ‘The Wrecking Boys,’ which is due to be released on YouTube in November.

Including lots of footage about how Mallorca is being regenerated and some amazing scenery around the beautiful island, the show will also cover the boys at work on their demolition jobs, what the girls get up to in the storage unit, and the personal lives of the staff. One team member was even filmed in his role as a local singer.