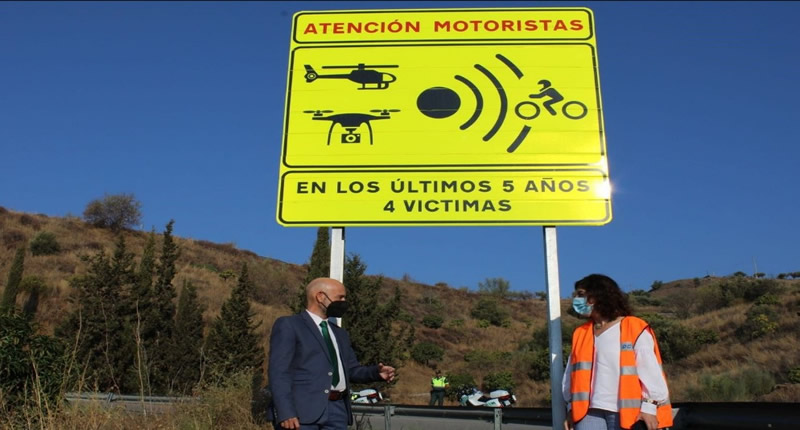 Malaga province is the third in Spain, after Santa Cruz de Tenerife, and Las Palmas de Gran Canaria, in which the General Directorate of Traffic (DGT) has installed the most special risk signs for motorcyclists along roads.

Javier Salas, the sub-delegate of the Government in Malaga, and Aida Vilaret, the provincial head of Traffic, together visited this Wednesday, September 29, the MA-3119 road that connects Benagalbon, in Rincon de la Victoria, and Moclinejo, which has one of these sections of road with special signage.

Of the 100 sections identified as high risk for motorists in Spain, nine are in the province of Malaga, in which “there have been fifty victims in recent years, including deaths and injuries”, the official pointed out.

The DGT has designed a vertical sign that has been installed at the beginning of each potential high-risk section, that will show the number of accident-affected motorists (deaths and injuries) registered on that piece of road in the last five years, Salas explained. He added that each year, the calculation of the victims on each section will be carried out, and the data of the signals will be updated.

The identification of the risk sections for motorcyclists, and their signalling, is a consequence of the accident rates of the users of this type of vehicle in the last five years, and they have been selected taking into account the sinuosity criteria of these roads.

Salas explained that “when faced with a road safety problem, the first thing to do is inform and raise awareness among users, and then monitor and control compliance with the regulations that affect them”.

In the first nine months of this year, there have been seven fatal accidents involving two-wheelers on interurban roads in the province of Malaga, in which eight people have lost their lives. While the total number of victims in two-wheeler accidents registered in 2021 amounted to 141, including hospitalised injuries, and those who did not require hospital admission, as reported by laopiniondemalaga.es.