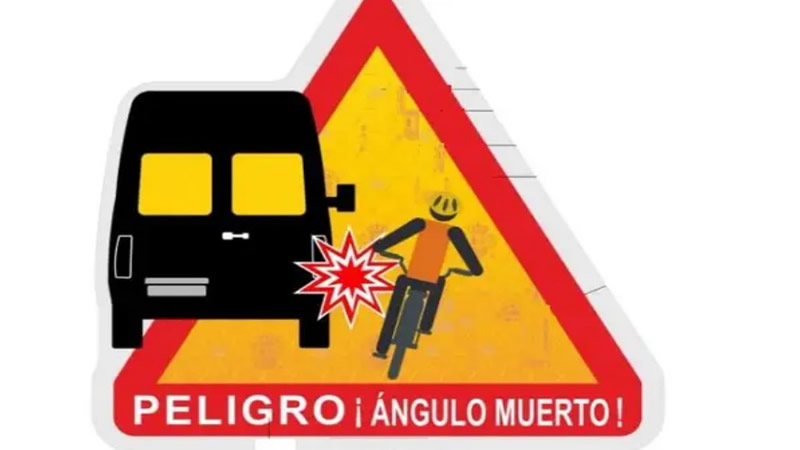 The new warning sign developed by the General Directorate of Traffic (DGT) has been published on Monday, October 4. It was presented with an instruction defining and publicizing precisely how to employ the new sign that alerts road users to the danger of blind spots in passenger and freight transport vehicles.

As explained by Pere Navarro , head of the DGT, “The objective of the same is to warn vulnerable users of the danger posed by being in any of these non-visible areas when they approach these marked vehicles, to enable them to position themselves where they are visible, in order to avoid risks “.

This new signal is the first measure from a set of actions that are being adopted in the European Union to reduce the risk of accidents, by improving the visibility of the drivers in delivery vans, buses and trucks.

Mr Navarro pointed out that the objective is to give drivers in larger vehicles a better view. He believes that until advanced driving assistance systems (ADAS) are incorporated in all vehicles, the option of signaling by the vehicle itself, to warn of the existence of blind spots, can be useful to prevent an accident.

Placement of the signs is voluntary by the driver, but must comply with the design and technical requirements defined in the instruction, to ensure maximum durability and visibility. They must only be marketed through authorized establishments that are registered as number plate handlers.

Signs must be positioned so that they are visible in all circumstances, and in such a way that they cannot obstruct the visibility of the regulatory plates and inscriptions on the vehicle. They must not impair the visibility of the various lights and signaling devices, or the driver’s field of vision. Details of the number of signs to place and the position depending on the vehicle, are included in the instructions.

This new warning signal was created thanks to the result of work between the administrations of municipalities such as Barcelona , Madrid, Zaragoza, and Logroño and the Metropolitan Area of ​​Barcelona (AMB).

The DGT also worked with UNO (Logistics and Transport Business Organization), CITET (Innovation Center for Logistics and Freight Transport), and AECOC (Association of Manufacturers and Distributors), for the implementation of this signal, as reported by larazon.es .