China warns World War Three could be triggered ‘at any time’ 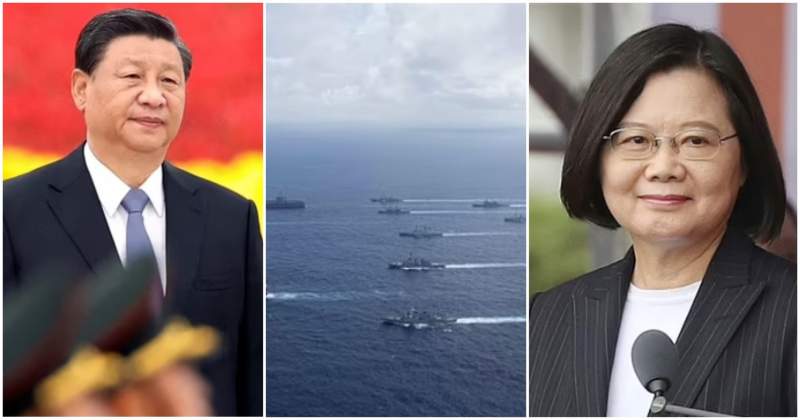 China has warned World War Three could be triggered ‘at any time’ as a western fleet of naval vessels gathers for ‘military exercises’.

China has warned that war with Taiwan “may be triggered at any time” after it deployed a record number of fighter jets into the self-governing island’s air identification zone. This has raised concerns worldwide that tensions in the region could escalate and turn into a full-scale military conflict.

Beijing despatched about 150 warplanes into Taiwan’s air defence zone over four days beginning on Friday, October 1,  the same day China marked a key patriotic holiday, in a record escalation of its grey zone military activity directed towards the island.

Beijing claims Taiwan as a province of China and has vowed to retake it, by force if necessary, and accuses its democratically elected government of being separatists. Taiwan’s government says it is already a sovereign nation with no need to declare independence. On Tuesday Taiwan’s president, Tsai Ing-wen wrote that Taiwan would not be “adventurists” but would do “whatever it takes” to defend itself.

Britain’s HMS Queen Elizabeth warship was part of an armada of American and Tawainese destroyers and carriers that took part in joint training with warships from six different countries over the weekend in the Philippine Sea amid rising tensions between China and Taiwan.

In another chilling piece of propaganda on Monday, October 4, The Global Times ran a story that asked ‘whether Australia is willing to accompany Taiwan and become cannon fodder’ after its foreign minister reached out for help preparing his defences.

Australia has been on the receiving end of Chinese wrath over the last few weeks after it signed a new alliance with the UK and the US. As part of the deal, Washington and London agreed to share nuclear submarine technology with Canberra- a move that caused a massive diplomatic argument with France.

Taiwan’s President Tsai said: “They should remember that if Taiwan were to fall, the consequences would be catastrophic for regional peace and the democratic alliance system.

“It would signal that in today’s global contest of values, authoritarianism has the upper hand over democracy.”

Taiwan hopes for peaceful coexistence with China, she said, but ‘if its democracy and way of life are threatened, Taiwan will do whatever it takes to defend itself.’