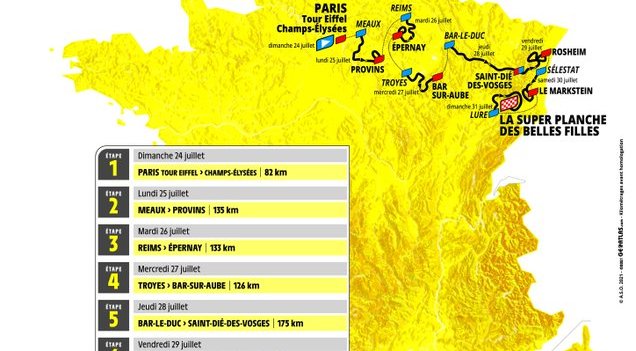 The eight-stage route for the women’s Tour de France will wind through eastern France.

The Tour de France Femmes is being resurrected in 2022, after 33 years off the programme. The race will begin on the final day of the men’s Tour in the hopes of increasing the audience for the female version of the famous trial. There will be two mountain stages, with one being a summit finish to round the race off.

The date for the event is 24-31 July 2022 and features eight stages. The men’s 21-stage route was revealed on the same day and starts in Copenhagen on the 1st July. Their route has “the entire palate of what it’s possible to provide on a Tour de France”, according to course designer Thierry Gouvenou. This includes a stage over cobblestones in the north of France, a 40km time trial, and the classic final-day finish on the Champs-Elysees.

The women’s race kicks off in Paris, and eight days later finishes at the summit of La Planche des Belles Filles. This is one of two mountain stages, with two rolling and four flat stages completing the run. The director of the race, Marion Rousse, said the route is balanced and will suit ‘many types of riders’.

The aim is to make the women’s Tour de France financially viable in the long term. The director of the men’s race said that this could prove tough to do. Christian Prudhomme thinks “if it has been [sustainable], the women’s tour would have been held for 40 years. The biggest challenge is to broadcast the race. We’ve done a good job, with the race starting the same day as the men’s race ends in Paris.” Around 190 countries televise the men’s race, with this crossover of stages hoping to capture about 170 of those for the women’s event. Prudhomme had to approach towns to capture interest in holding stages for the Women’s Tour de France route, but he is hopeful for the future. “The goal is to organise a race that will stay, that will still exist in 100 years, that I can watch when I’m old and using a walker.”