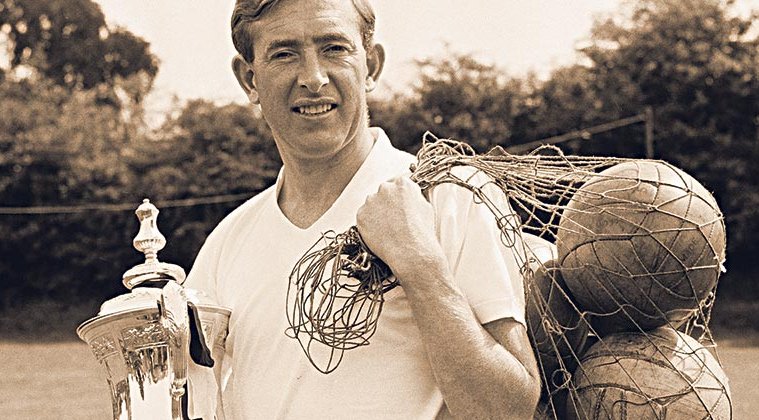 Blanchflower - iconic figure of the 50s.

The mayor of Aylesbury in the 1950s was Pat Sage, who held a prominent position within the AAA (Amateur Athletics Association). As he was a friend of my father, we regularly attended the annual meetings and he made sure we had tickets for the AAA Championships of 1954, which attracted top athletes from many different countries to our home town.

They included Arthur Wint MBE from Jamaica who had won Gold and Silver at both the 1948 and 1952 Olympics in the 400 metres and McDonald Bailey from Trinidad, holder of the world 100-metre record from 1951-55. Roger Bannister and Gordon Pirie also appeared. At the age of 15, my autograph book was the envy of my school pals.

My father took me around to make sure I had exposure to the leading sportsmen and events of the day. We had no need of television as we travelled around the Home Counties, watching everything live.

At White Hart Lane, we saw the great Danny Blanchflower in a team that also included another legend at right-back – Alf Ramsey. To Dad’s delight (he was an Arsenal supporter), Spurs were held to a 1-1 draw by Aston Villa, and I got Blanchflower’s autograph. A good day out and there was no sign of racism, as there was not a single black player on the pitch.

At Southend we watched cricket and saw Frank Lowson, fresh from a 259 not out against Worcestershire. He was politely applauded as he completed a century for Yorkshire versus Essex. We never made it to Lords or the Oval.

We were present at cycling races in Biggleswade (Bedfordshire), boxing bouts in Aylesbury and the Oxford-Cambridge Boat Race at Hammersmith (London).

At Wimbledon, in 1955 we turned up for the Men’s singles final. This was between two Australians, the great server Lew Hoad beating the great returner, Ken Rosewall. The next day, these two teamed up to win the Men’s doubles title. In 1957 the top four Wimbledon seeds were all Australians and all the participants were amateurs. Line calls were hardly ever questioned.

I and my younger brother used to trail round behind our parents as they played nine rounds at a private golf course in the Wendover Hills. Later my father set up a putting lawn in our garden.

After I left home, inspired by my father’s commitment, I was going to sports events with friends or sometimes on my own. I attended bull-fights in Barcelona and Granada and a cock-fight in the Philippines, but I don’t regard these as sports. Eventually I went to watch sumo wrestling in Tokyo, a baseball game in New York and a basketball match in Raleigh, North Carolina.

Nowadays, confined to Andalucia, I rely on television and the press to keep up. But I miss the atmosphere at the events, apart from the trips and Dad’s company.