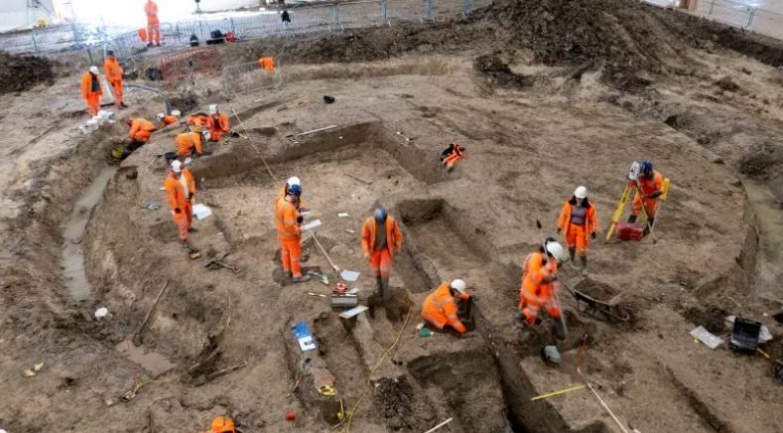 The route for the HS2 high-speed railway is continuing to be dug throughout the UK and more artefacts are being unearthed at various sites all the time. The newest discovery in an abandoned medieval church, however, is one of the very best.

An ‘astounding’ set of Roman sculptures have been uncovered at the site of St Mary’s Church while the ground is being turned over for the railway line. The church is situated in Stoke Mandeville in Buckinghamshire. Two complete busts of what appears to be a man and a woman and a further stone head of a child have been found.

A hexagonal glass Roman jug with large pieces still intact has been delicately removed from the ground also. It is very rare to get a piece like this in such good condition after what is believed to be 1,000 years in the ground. A vessel on display in New York’s Metropolitan Museum of Art is the only known comparable item.

All of the artefacts taken from the old church have been carefully wrapped up and sent for analysis by specialists. The experts on site believe that the place was used as a Roman mausoleum before the church was built over the top in 1080AD. The site caused some consternation when it was announced, as around 3,000 bodies have been dug up from the graveyard of the church, and reburied elsewhere.

Dr Rachel Wood, lead archaeologist for HS2 contractor Fusion JV, said: “They’re hugely significant because they’re really rare finds in the UK. “To find one stone head or one set of shoulders would be really astonishing, but we have two complete heads and shoulders as well as a third head as well. They’re even more significant to us archaeologically because they’ve actually helped change our understanding of the site here before the medieval church was built. They are so significant and so remarkable that we would certainly hope that they will end up on display for the local community to see.”