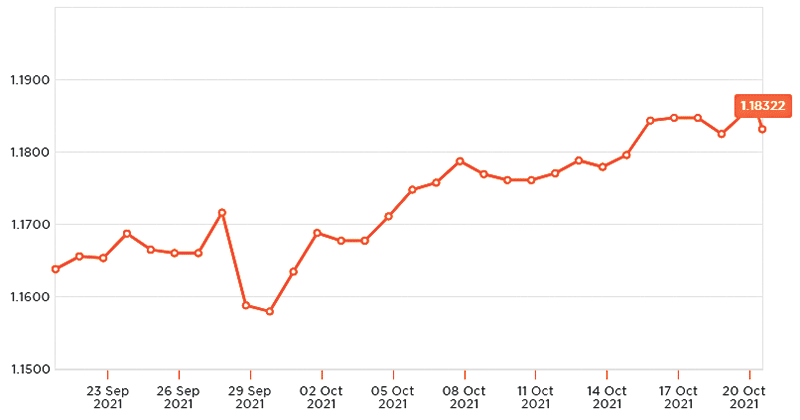 The pound was able to mount a convincing recovery throughout October.

The euro has trended broadly lower over the past four weeks, mostly as a result of the European Central Bank’s (ECB) dovish bias as the policy divergence between it and other major central banks has increasingly become a liability for the single currency.

Whilst its peers show signs of starting to tighten its monetary policy, the ECB remains committed to maintaining its ultra-loose policy, much to the disappointment of EUR investors. Meanwhile the euro has also been pressured by Europe’s energy price crisis, triggered by a sharp appreciation of wholesale gas prices, and stoking fears parts of the continent could even face some power cuts this winter.

Recent Eurozone data releases have also acted as a headwind for the single currency in recent weeks as they have generally pointed to a weakening of economic activity in the third quarter. Looking ahead, as the divergence between the ECB and other major central banks looks to grow wider, the euro could face an uphill battle next month, particularly if EUR data continues to disappoint.

The pound has been met by some volatility over the past month, with the currency initially tumbling amidst fears over the UK’s ‘winter of discontent’, before rallying sharply amidst signals from the Bank of England (BoE) that it could start hiking interest rates more aggressively than previously thought.

Driving the collapse in Sterling in late September were a series of crises, including fuel shortages, supply chain constraints and surging energy prices, which stoked concerns UK households could face a difficult winter which may further undermine the economic recovery. However the pound was able to mount a convincing recovery through October, courtesy of some hawkish BoE commentary.

This saw multiple policymakers suggest that the BoE may need to act to curb inflationary pressures in the UK, which was interpreted by GBP investors that the BoE could start hiking interest rates as early as November. It seems safe to assume that the BoE’s November policy meeting will be the primary focus for GBP investors going forward. This could result in some notable volatility in the pound, if the BoE abstains from hiking rates or indicates future hikes could be spaced further apart than some investors had hoped.

The US dollar enjoyed some notable support in late September as concerns over an energy shortage in Europe, the threat of the collapse of China’s second largest property developer and fears the US could hit its debt ceiling rattled markets and sent them flocking to the safe-haven currency. However the US dollar has gradually relinquished these gains through October, largely in response to improving market sentiment. Meanwhile, the focus for USD investors is increasingly on the Federal Reserve’s tapering plans, which it is widely expected to formally announce in November.

This prompted some volatility in the ‘greenback’ following the release of the latest US payroll figures after they disappointed for the second month running, raising some fleeting doubts the Fed would be confident in pushing ahead with its tapering of its asset purchases. Unsurprisingly the Fed’s tapering announcement will be the highlight for USD investors over the next month, with the direction of the US dollar potentially being determined by the pace at which the US central bank seeks to withdraw its pandemic-era stimulus.

Currencies Direct have helped more than 325,000 customers save on their currency transfers since 1996. Pop into your local Currencies Direct branch or call us to find out how you can save money on your transfers.