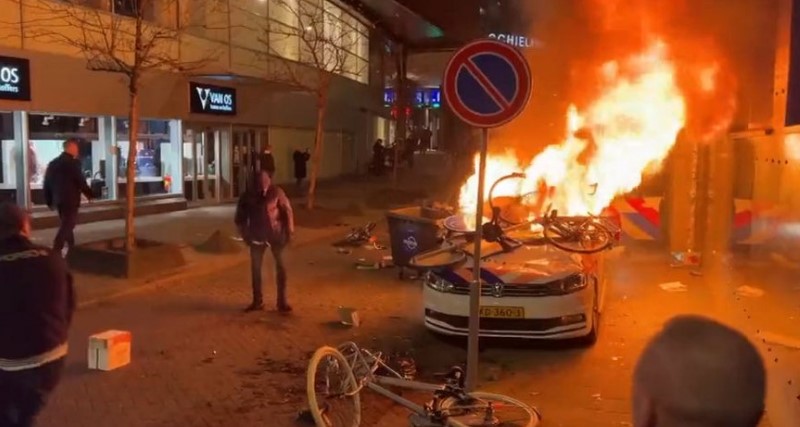 An anti-vaccine protest took a turn for the worse on Friday, November 19 in the Dutch city of Rotterdam. At least two demonstrators are known to have been injured after police officers opened fire when they were overpowered by the crowd.

Thousands of people had taken to the streets to protest about the Dutch government’s latest coronavirus measures. What started out peacefully, in Coolsingel street in the heart of Rotterdam soon descended into stone-throwing, and the firing of rockets at the police. As a result, the police turned water cannons on the crowd, and charged them on horseback.

Speaking with Reuters, police spokeswoman Patricia Wessels described the moment officers were overwhelmed by the protestors and resorted to the use of firearms, “We fired warning shots and there were also direct shots because the situation was life-threatening. We know that at least two people were injured, probably as a result of the warning shots, but we need to investigate further the exact causes”.

As the violence escalated, a police emergency order was issued in the city, with all public transport being shut down, and people told to return to their homes immediately.

Demonstrators had gathered to protest at a new government rule passed this week that will require the presentation of a Covid passport to enter many establishments. This includes bars and restaurants, all of which will have to close at 8pm.

Access to these establishments until now, could only be granted on presentation of a negative test carried out within the last 24 hours. Infections in the Netherlands have surpassed the worst records in the last two weeks, with 23,000 positives per day as of last Thursday 18, as reported by lavanguardia.com.