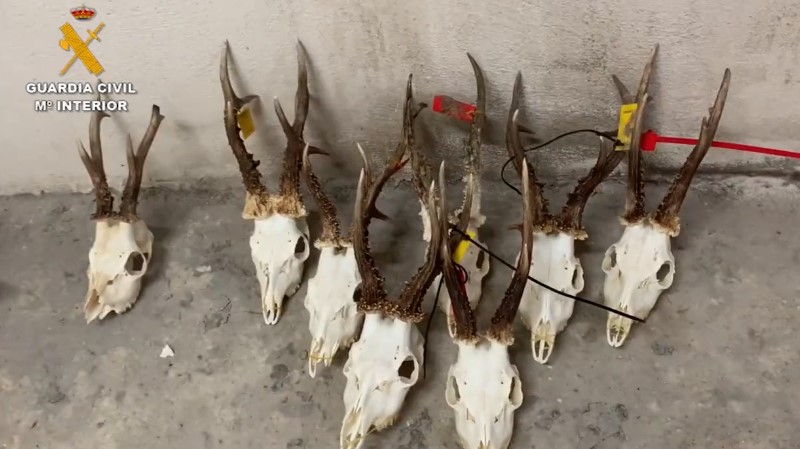 The Guardia Civil has carried out an operation that resulted in 23 individuals being placed under investigation in various provinces across Spain. These people are all suspected of being members of a poaching network that manipulated hunting seals to be reused.

They have reportedly been charged with the alleged crimes of document falsification, against flora, fauna, and poaching, concealment, receiving, and belonging to a criminal group.

During the course of their operation, officers discovered 13 roe deer trophies, a wolf skull, a freezer with the bodies of the nanday parrot species, all pending taxidermy. Four mountain male trophies, and 123 hunting seals have also been intervened. Most of the seals seized had been tampered with.

The operation was launched back in May when the force became aware of the existence of an illegal workshop dedicated to dissecting animals located in Mostoles, Madrid. Officers quickly verified that the taxidermy activity was being carried out, and that the premises were equipped with all kinds of tools, machinery, and products necessary for it.

After analysing the data from the taxidermy books and the seals, it was observed that the security system of many of them had been altered, which is why two more inspections were subsequently carried out. In one inspection, a freezer with non-native species such as a ‘nanday parrot’ was sealed, pending taxidermy, and in another, 4 unsealed wild male trophies, and 123 hunting seals were seized.

It was discovered that the hunting dates marked in some of them did not coincide with the data provided by the provincial hunting delegations, and in others, they were found to have been duplicated. So far, a total of 33 crimes have been clarified, and the illegal taxidermy workshop has been closed down.

With the police investigations carried out, the titles of the bounded and data of hunters were located. Among the people being investigated are the taxidermist and 22 other people, including hunters and reserve managers.