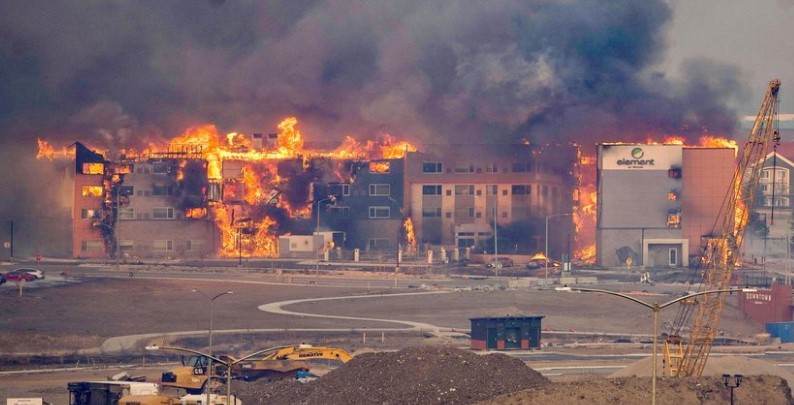 Hundreds of buildings in Boulder County, Colorado, have been destroyed, with 1000s of people evacuated

According to the Boulder County sheriff, Joe Pelle, what started out as several small isolated grass fires, caused by a downed power cable, suddenly escalated into raging blazes. During a press conference, Pelle explained that the first report came at around 11am on Thursday morning.

Since then, two fires have spread, with the largest one, dubbed the ‘Marshall Fire’, already burning over 1,600 acres. “We’ve been really concerned about the speed of the fire”, said the sheriff. “This was consuming football-field lengths of land in seconds”.

With a population of about 20,000, the residents of Louisville, Colorado, are being asked by the Boulder Office of Emergency Management to evacuate the area, as the Marshall Fire advances.

In an alert posted on Twitter, urging the public to immediately leave, the situation in Louisville was described by the National Weather Service of Denver/Boulder as life-threatening.

A Centura Health spokesperson told ABC News on Thursday afternoon that Centura Health’s Avista Adventist Hospital in Louisville had started evacuating its patients, starting with its most critical.

Clint Folsom, the Superior Mayor of Louisville told Denver ABC affiliate KMGH, “This is still a very active, fluid situation”. He said he believed that around 200 buildings, including family homes, had been burned.

One firefighter was injured when the strong winds blew some debris into his eye, but Pelle assured there had been no other reports of injuries. “However, I’d like to emphasise that due to the magnitude of this fire, the intensity of this fire, and its presence in such a heavily populated area, we would not be surprised if there are injuries or fatalities”,

High winds of up to 100mph also make it very difficult for fire officials to plan any aerial attack on the blaze.

The office of Jared Polis, the governor of Colorado, said that a state of emergency had been declared. “Prayers for thousands of families evacuating from the fires in Superior and Boulder County”, tweeted Polis. “Fast winds are spreading flames quickly and all aircraft are grounded.”

According to the National Oceanic and Atmospheric Administration, and the Department of Agriculture, the Boulder area is currently suffering from extreme drought, as reported by uk.news.yahoo.com.

Security camera footage captures wildfire burning through a Colorado family’s backyard. The family was not home at the time.

A family member shared the video on Twitter, writing, “I don’t know if my home is still there.” https://t.co/DOrYfTmu6D pic.twitter.com/fyRendQo6C