Magawa: Hero rat who won a medal for detecting landmines has died 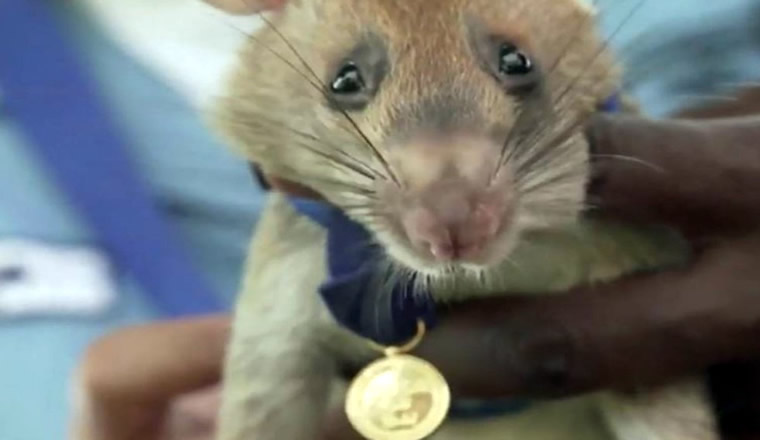 An African giant pouched rat named Magawa, who became a hero during his five-year career sniffing out landmines in Cambodia, has died at the age of eight.
Magawa had been trained by the Belgian non-governmental charity organisation, APOPO, to detect landmines, as well as other types of explosives. Aged three, he was sent to Siem Reap, in the Asian country of Cambodia, where the rodent was set to work.
He subsequently helped to clear the equivalent area of around 31 football pitches – more than 225,000m². The charity explained how, in five years, the brave rodent uncovered 71 landmines, along with 38 other types of unexploded ordnance.
As a reward for his services, Magawa was awarded the animal equivalent of a George Cross –the PDSA Gold Medal in 2020. It is a medal that recognises acts of heroism by British military personnel, and citizens.
He eventually retired from his duties, and was replaced by Ronin, another trained rodent. A charity spokesperson said Magawa had recently become noticeably more lethargic, spending more time asleep. As he got nearer his time, he gave up all interest in food.
Magawa died peacefully last weekend explined the charity spokesperson, “All of us at APOPO are feeling the loss of Magawa, and we are grateful for the incredible work he’s done”.
“During his career, Magawa found over 100 landmines and other explosives, making him APOPO’s most successful HeroRAT to date. His contribution allows communities in Cambodia to live, work, and play; without fear of losing life or limb”, they aded.
Landmine detection rats have been bred, and trained, at APOPO’s operational headquarters at the Sokoine University of Agriculture in Tanzania since 2000, as reported by news.sky.com.