Thousands of kilos of hashish seized in Spain’s Almeria 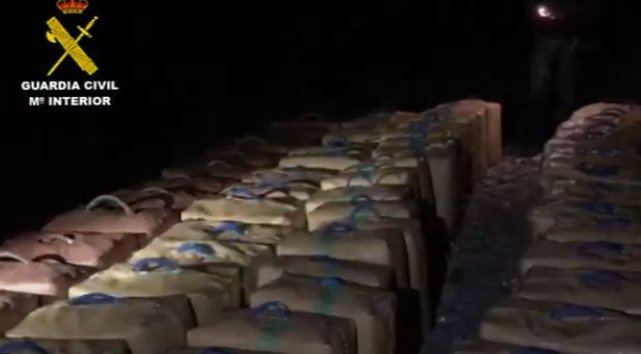 Thousands of kilos of hashish have been seized in Almeria’s Cabo de Gata.
Officers from the Guardia Civil in Almeria have arrested five people in Almeria’s Los Escullos. The officers also seized a staggering 3,300 kilograms of hashish and a cargo van.
The Guardia Civil had heard that drug traffickers were planning to smuggle in a shipment of hashish from Morocco to Los Escullos in the Cabo de Gata.
The interception operation involved SIVE operators from the Almeria Command that carried out the sea-based part of the operation. Additional personnel carried out the land-based side of the operation.
The Guardia Civil officers were able to observe a large group of people gathering next to the Los Escullos jetty. There were also vehicles in the area. The officers decided to intervene and began the seizure operation.
As soon as the people gathered on the beach saw the police coming they tried to flee in panic. The van was abandoned and on the beach, four people were initially arrested. The van was loaded with bales of hashish and the drug traffickers also left hashish bales lying on the beach. One of the traffickers who had been loading the van attempted to escape via the water. The person had to be rescued and they were suffering from hypothermia due to the cold water temperatures.
During the operation, five people were arrested and the Guardia Civil seized more than 3,000 kilograms of hashish along with the van which would have been used to transport the drugs away from the beach.