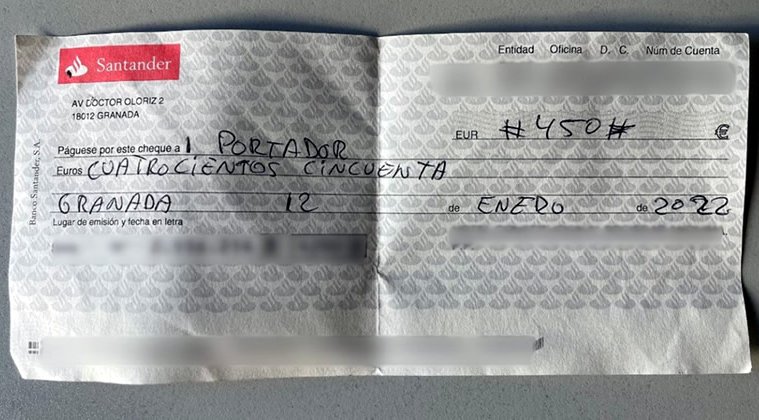 An honest Angel in Granada hands a cash cheque in to the police. image: [email protected]

Maybe as a result of the pandemic, people are not as well off as they used to be, which might make them a little more desperate and mercenary than they were a few years ago in certain situations.
This theory was most certainly put to the test in the province of Granada recently when a local resident by the name of Angel found a cash cheque to the value of €450 in the street.
This is by no means a small amount of money, but Angel didn’t think twice about it and promptly went to his Local Police station in the city, and handed the lost property over.
Posting on their Twitter account, the Granada Local Police praised Angel’s honesty. They explained how he had been walking along Avenida de la Constitucion, one of the busiest streets in the city centre.
Spotting what looked like a cheque lying on the pavement, Angel picked it up and inspected it. The cheque was made out ‘al portador’, which basically means the bank must pay the specified cash amount of €450 to ‘the bearer’.
As is the normal protocol in such a case, the cops contacted the bank to check with them if anybody had reported the cheque missing, or stolen. When told this was not the case, the Local Police officers went in person, to ensure the payment would be cancelled. Bank officials informed them that no cheque had been voided, so they proceeded to do so.
The person who issued the cheque was contacted, and told that the €450 payment had been cancelled. They can now issue a fresh cheque to the recipient whenever they want to.
With regard to Angel, ‘the supportive man’, as the Local Police have named him, they thanked him for his civic commitment. “You are an example. People like you”, read a statement on Twitter from the officers of the Local Police of Granada, as reported by granadadigital.es.