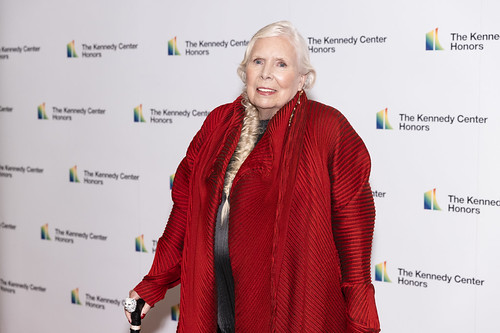 Singer Joni Mitchell has joined Neil Young in asking for her music to be removed from Spotify over Covid misinformation concerns. “Irresponsible people are spreading lies that are costing people their lives,” the Canadian singer said in a post on her official website.
Earlier this week, Young had given Spotify an ultimatum saying the streaming platform must choose either him or podcaster Joe Rogan. Spotify has now begun removing Young’s music even though Rogan has been accused of spreading false information about Covid-19.
In her message on Friday 28 January, Mitchell, whose hits include Big Yellow Taxi, said she stands in solidarity with the Canadian-American singer, Neil Young, and with the “global scientific and medical communities”. Unlike Young, Mitchell did not specifically name Mr Rogan in her post.
However, she did include a link to an open letter signed by a group of scientists and medical professionals, which criticised Spotify for hosting Rogan’s podcast, the Joe Rogan Experience. The letter details claims against Rogan, accusing him of sharing misleading claims and provoking distrust in science and medicine.
It calls on Spotify to “take action against the mass-misinformation events which continue to occur on its platform”, as reported by BBC News.
Neil Young, who is behind classic hits such as Harvest Moon and Heart of Gold, accused Spotify on Monday of “spreading fake information about vaccines – potentially causing death to those who believe the disinformation being spread by them”.
On Wednesday 26 January, Spotify made their choice and began removing Young’s music from the site. It also defended its record in removing misinformation from the service. “We have detailed content policies in place and we’ve removed over 20,000 podcast episodes related to Covid since the start of the pandemic.”
The Joe Rogan Experience is Spotify’s most popular podcast, with a reported 200 million downloads a month. The streaming platform is said to have paid $100m (£75m) for rights to it.
Joni Mitchell and Neil Young have been friends for a long time and have both survived Polio. They both had the illness in the early 50s, shortly before a vaccine became available.