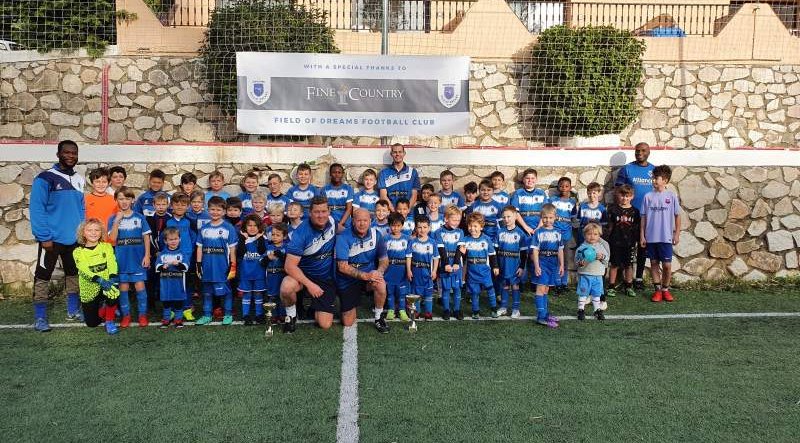 IF any further evidence was needed that Spain’s booming property market is back in full swing again after the pandemic, then the success of realtors Fine & Country, and their International Business Development Manager Nikki Wilson, in Spain is just that.

Opening 12 new offices in Spain alone last year, Fine & Country have also taken the time to get involved in the community, sponsoring the kit for Costa del Sol children’s team Field of Dreams in Calahonda.
The Euro Weekly News caught up with Nikki at the football grounds where her son trains alongside tens of local children, to talk business, moving to Spain, and giving back to the community.
Nikki, originally from Cuffley, Hertfordshire, but now living in Mijas, told the Euro Weekly News that Fine & Country, one of the world’s biggest real estate companies, has had one of its best years ever.
She said:  “Last year was the busiest time for estate agents.”
She added: “We opened 12 offices in Spain in one year, in Benahavis, Estepona, Ibiza, Inland Costa del Sol, La Cala, La Manga, Malaga, Benalmadina, Costa Blanca South, Marbella, Mallorca, and Sotogrande
The company also has offices on the Costa Blanca North.
Nikki added: “The brand has experienced impressive growth across Spain and the Balearic Islands. With the inclusion of the new Ibiza office, representation of the brand can now be found in some of the most prestigious and up-market Spanish locations.”
Speaking more about what Fine & Country offer, she explained: “We’re a prestige brand, offering the best exposure, best presentation and best service.”
The company’s hard work has paid off, with Nikki explaining, “We are really growing at the moment with over 300 offices worldwide,  these are exciting times for the company.”
Speaking about why she had chosen to move to Mijas from the UK, Nikki told the EWN she had been coming to the Costa del Sol since a child after her parents bought a property in Marbella Old Town.
She explained that being on the Costa del Sol had just felt like home for her and led her to buying her own holiday home before eventually deciding to move here full time after finding she and her son, Tam, nine, never wanted to leave when it was time to get back on the flight to the UK.
She explained that it was this community vibe that was a large part of her love for the Costa del Sol, and made it such a perfect place to raise a child as a single parent.
She explained: “It’s such a lovely place to be as a mother. It’s great for families and the schools are amazing.”
She added that Field of Dreams was a community affair, with local parents and coaches coming together to train the children’s teams each week, including head coach Matt Gore.
Getting involved in that community vibe, Fine & Country has just sponsored the team’s new kit.
Alongside its local community work, Fine & Country have supported charities in the UK and around the world, with the Fine & Country Foundation supporting homeless charities globally, raising a phenomenal £140,000.
The Foundation awarded £123,000 to charities via two grant schemes and other programmes towards the cause over the year – making 2021 the second highest year on record for donations.
Of this almighty figure, £92,000 came from agent contributions with Fine & Country agents generously donating a proportion of their fee to the Foundation.
In addition, £20,000 was raised through events run and organised by head office. A further £21,000 has been contributed by Fine & Country UK through a percentage from referral fees and marketing pack sales.
With success both in business and in fundraising, Fine & Country have a unique understanding of the property market globally.
Nikki said: “Many of the new and existing locations have seen rapid growth over the course of the last year after the effects of the pandemic and Brexit caused many Brits and other European patriots to reimagine their lives overseas.”